How are lithium cells produced? All about mixing, assembly and the filling process

When discussing lithium batteries, it is impossible to avoid focusing on their essential component, namely, the cells of which they are composed and which enable them to deliver power. The three most widely used lithium ion cell types, each employed for a distinct kind of application, are as follows:

As can easily be inferred, cylindrical cells are cylinder-shaped, are the most commonly used and were among the first to be mass-produced. They can have different diameters, the most common being the 1865, where the number 18 indicates the diameter (18 mm) and the number 65 indicates the length (65 mm). There are, however, other formats, such as the 2170 or, again, the one most recently adopted by Tesla, the pioneer of lithium batteries for electric cars, with its 4680 used to power the Tesla Model Y. Apart from a few car manufacturers who have made this choice, cylindrical cells are routinely used in medium-small battery packs, e.g. in micro-mobility (bikes, scooters and motor scooters), portable tools, medical devices, and so on.

These types of lithium cell are so called because of their bag-like shape. They have a lightweight design and, as they have no inherent robustness, special protections, such as the addition of aluminium frames, must be inserted during production of the module to give them structural robustness. They come in various sizes which can be modified according to the manufacturer’s requirements. These cells are mainly used in smartphones, drones, laptops and the automobile industry.

Prismatic lithium cells have a solid rectangular casing made of aluminium or of a very strong plastic material. The internal components are layered. They come in different sizes, with a variety of formats depending on the field of application. Their individual components can reach a high capacity. Due to their structure, prismatic cells are best suited for the production of lithium batteries for the machinery and industrial vehicles industry, or the energy storage sector, all of which normally require medium-high capacities.

The benefits and drawbacks of the various cell types have already been discussed, but few people ever enquire about the lithium-ion battery cell production process and how it works.

Although the many cell types that make up a lithium battery appear very different from one another when viewed from the outside, it is astonishing to learn how similar their interiors actually are. The different types of battery cell production and assembly will now be explored in more detail.

Added to these is a central separator, a layer of thin material composed, as a rule, of a plastic or ceramic polymer that acts as an insulator between the two electrodes. Finally, there is an electrolyte, an organic liquid containing lithium salts which fills the inner volume of the cell and wets the electrodes, thereby joining anode and cathode. 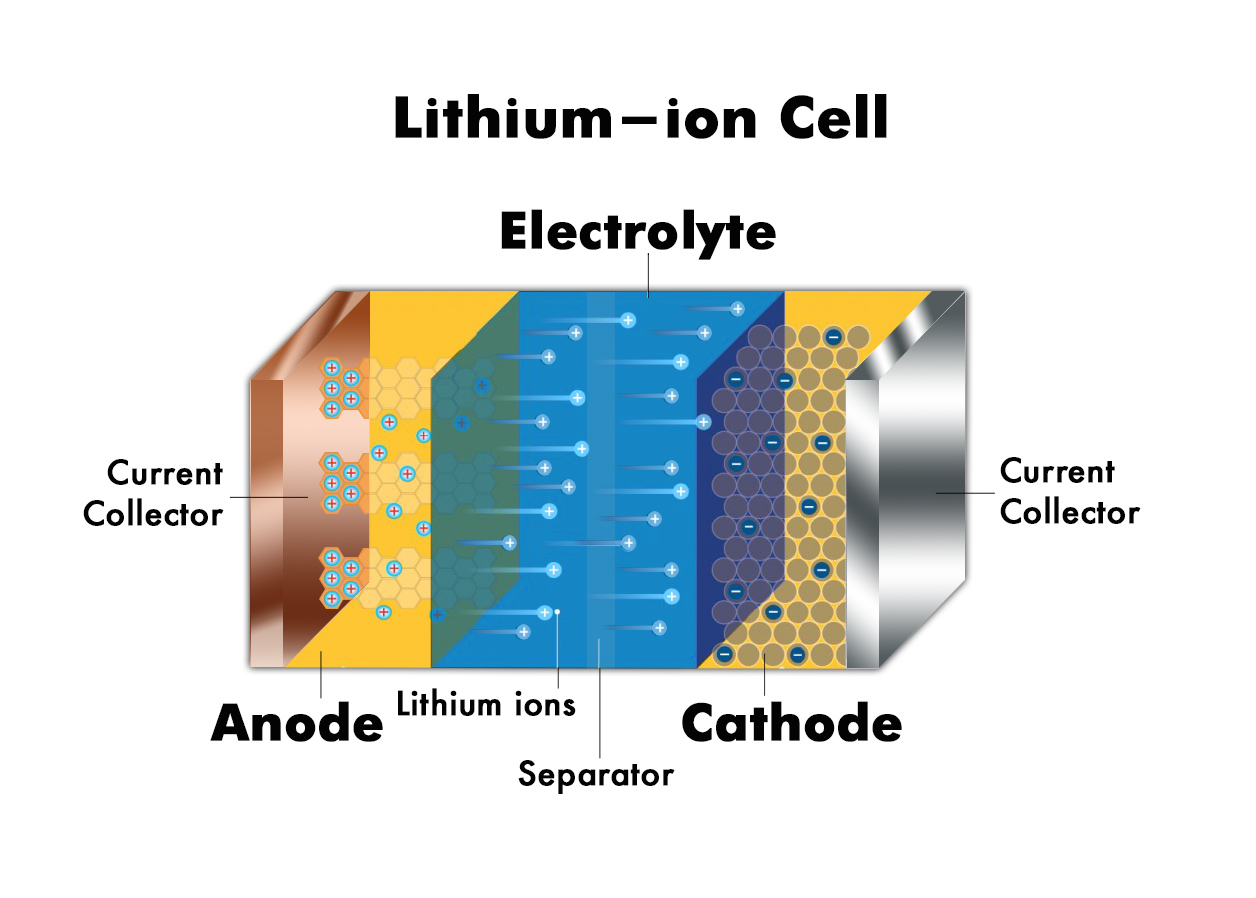 But how are the anode and cathode sheets made?

First of all, the raw materials, in the form of powders that will be used in the lithium-ion cell, are combined in a large mixer using different methods: dry, in liquid form, with solvents or in water.

The resulting chemical compounds must then be added with components (binders or other substances) to obtain a uniform layer that will be applied on the metal electrodes through the coating process. This operation is very similar to the screen-printing process, where a sheet of aluminium or copper is passed under a roller press and the resulting mixture is spread out perfectly so that the cell is uniform and high-performing.

Once the coating process has been completed, the drying phase begins in an oven that can reach 150 °C. This phase includes maintaining a steady temperature and humidity level and is relatively comparable to other production processes, such as those used in the ceramics industry. 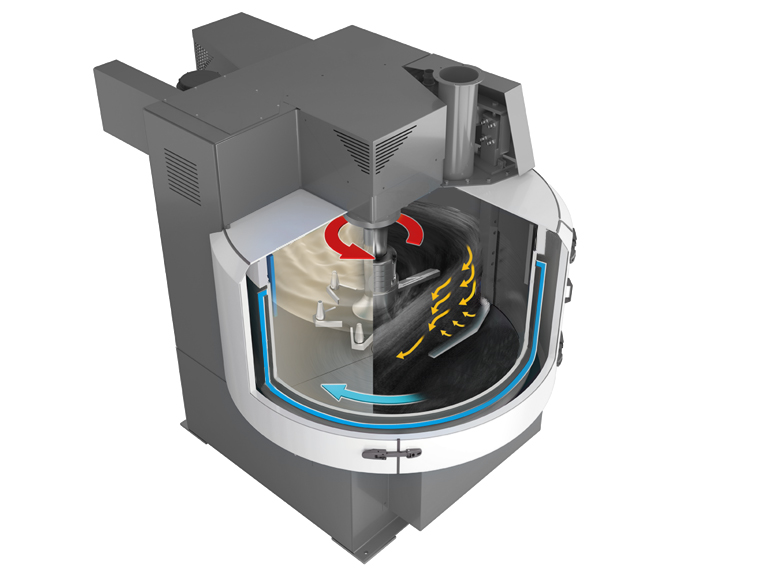 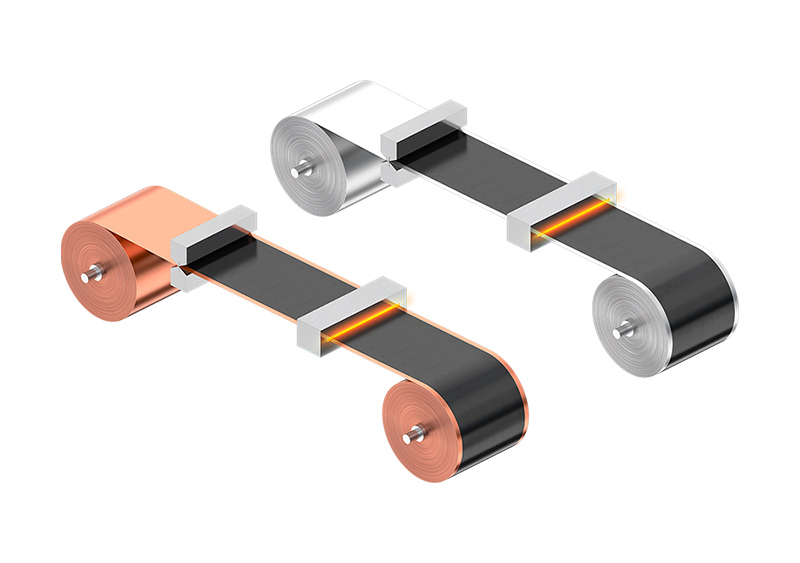 Additional details on this phase?

Week 10 of Battery Weekly 2022, our weekly report on the lithium ion battery industry, featured a discussion on precisely this subject

Once the anode and cathode sheets have been prepared, they are ready to be joined by adding the separator. The real assembly phase of the cells (the backbone of a lithium battery) then commences, and can be executed using a variety of composition techniques:

This solution involves cutting the anode, cathode and separator sheets individually, using a robotic arm for each, and then stacking them on top of each other until the entire lithium cell is created.

The other two construction techniques, however, result in a single sheet that may be rolled onto itself in a variety of ways.

The folding method known as Z-folding sees the anodes and cathodes cut into sheets, while the separator remains continuous. In this case, the anode and cathode sheets are first cut and then inserted into the separator, a continuous roll which keeps the two electrodes separate by means of a Z-folding process.

As has already been illustrated, the assembly methods may be different, but the battery cell composition remains the same. In the images of the various assembly processes can be seen how the anode has a basic brown colour, as the coating is deposited on a thin layer of copper. Then comes the plastic or ceramic separator, and finally, the cathode, which is grey in colour, since it is deposited on a layer of aluminium.

What are the pros and cons of the different cell assembly methods?

At the time of writing, no one technology prevails over the others in lithium ion cell production. Each manufacturer has a favoured methodology and each will argue the merits of its choice according to the end use of the lithium battery taken as a whole.

What can be said, however, is that the stacking method makes good use of the space on a rectangular cell (pouch or prismatic). This is because, positioned in this way, the sheets manage to fill all spaces perfectly, thus increasing the active area. Nevertheless, the stacking method carries two types of risk:

In contrast, rolling or folding systems give a better guarantee of separation between components, since there are no gaps in the separator. The disadvantage, in this case, lies at the bending or curving point, which is subjected to greater mechanical stress and thus runs a greater risk of rupture, causing the two electrodes to short-circuit.

Furthermore, in the rolling method, the end result is a more or less oval-shaped roll, meaning that the corners of the rectangular cell contain no material and hence that less use will be made of the inner volume. For this very reason, even large cells are often made by placing several smaller rolls parallel to each other inside the cell.

What does the structure of a lithium cell look like after assembly?

The above image gives a clear example of the internal lithium battery cell composition, before it is placed into its containment case and used in modules to create the complete lithium battery pack. In this specific case, one is dealing with a prismatic cell, where two “small packs” are held in place by a central ribbon (yellow).

In the centre can be seen the separator (white), while to the right and left are the cathode (copper) and anode (aluminium), which will then be connected to the external terminals of the cell by means of ultrasonic welding.

Once assembled, the cell is placed in a case and filled with the electrolyte

Once assembled, the various materials of lithium cell composition are placed in a containment case, with the two outer positive and negative electrodes welded to the inner tabs and a central filler hole where the electrolyte will be injected. It will be recalled that the electrolyte has the basic function of passing the lithium ions from cathode to anode.

The animation shows the various stages of cell filling, an operation that at first glance seems simple, but which in fact is a particularly delicate and costly process requiring numerous steps. A liquid containing lithium salts is inserted into the central hole. The stack gradually absorbs it by means of capillary action. Where liquid is actually needed is in the middle of the cell, between the two electrodes and the separator.

Filling is an extremely slow process, since, in order to allow the liquid to be absorbed without leaking, the cell needs to be filled at various times. Suffice to say that the final filling is done after an aging period of several days. Prior to the final sealing, a filling level control phase is carried out by weighing the cell. This step is essential and absolutely necessary, as once the cell is completely sealed the hole will be closed and no longer accessible.

Lithium cell assembly is only one piece of the puzzle

Correct assembly of the cells that make up a lithium battery, whether such cells are prismatic, cylindrical or of the pouch type, is therefore an extremely complex operation, requiring long machinery set-ups as well as the utmost precision at every stage, an essential element to ensure safety, quality and reliability over time. Because of the regular and stringent inspections for contaminants and the need for uninterrupted operations in cleanrooms, this process requires huge investments as well as expansive facilities.

After the choice of the most suitable lithium chemistry, correct cell assembly is without doubt the first step (of a long series) required to achieve complete efficiency of a lithium battery. It is a complex chain of actions that ranges from the creation of the module to the implementation of state-of-the-art control electronics with advanced BMS, and culminating in the development of battery packs with increasingly advanced architectures.

Each electrical application has its own unique specifications, and in order to ensure proper operation it is crucial to strike the right balance between all of these components which, like pieces of a jigsaw puzzle, must be expertly positioned to create the product’s identity, something that can only be ensured by a skilled and consolidated manufacturer.

DO YOU BUILD INDUSTRIAL VEHICLES AND WANT TO KNOW WHICH ELECTRIFICATION SOLUTION IS BEST FOR YOU?

Each Flash Battery lithium battery is designed beginning from your real needs: request your free assessment and find the best match for your requirements.