How does the recycling of a battery work? Let’s find out how to recover more than 95% of a lithium battery

The issue of recycling lithium-ion batteries is now a widely debated topic, as increasingly more batteries are approaching the end of their life and need to be properly disposed of or recovered.

In our previous article “Lithium battery recycling: what you need to know“ we focused on why it is important to recycle the components of a lithium battery, how they are disposed of and which regulations must be followed.

We can but deal with the more technical aspects related to the recovery of the lithium battery, analysing in detail the recycling processes currently in use, the concept of second life and the future scenarios which industry experts are currently discussing.

The 7 processes for recycling lithium batteries

Depending on the complexity of the lithium cells (chemical and mechanical) and the recycling strategies of the different plants, in order to maximise recycling efficiency while ensuring economic competitiveness, we outline 7 fundamental phases:

Recovering materials from the lithium battery

In general, pyrometallurgical processes are more expensive in terms of energy consumption and lead to greater material losses, but have the advantage of obtaining metals for commercial use. On the other hand, hydrometallurgical processes are able to obtain high quality materials ready for direct reuse in new batteries, therefore potentially more efficient, but require a greater input of reagents and steps, thus increasing their complexity.

In fact, the latter allow a recovery of up to 100% of Lithium and Cobalt, 98% of Manganese, 75% Aluminium, also in the form of cathode/anode materials ready for use for new cells, provided, of course, the compromise between expenses and revenues in the recycling process is found. 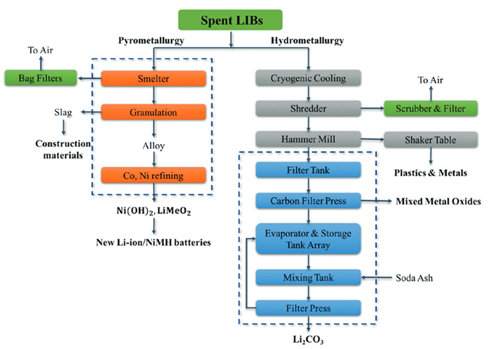 Fig. B: Example diagram of pyro- and hydrometallurgical processes for the recycling of NiMH, LMO and LCO batteries [2]

The following table shows some examples of metals and obtained products recovered from the recycling of lithium batteries at the end of their life with different recycling processes and the respective purity obtainable, which as can be seen, ranges from 90 to 100%: 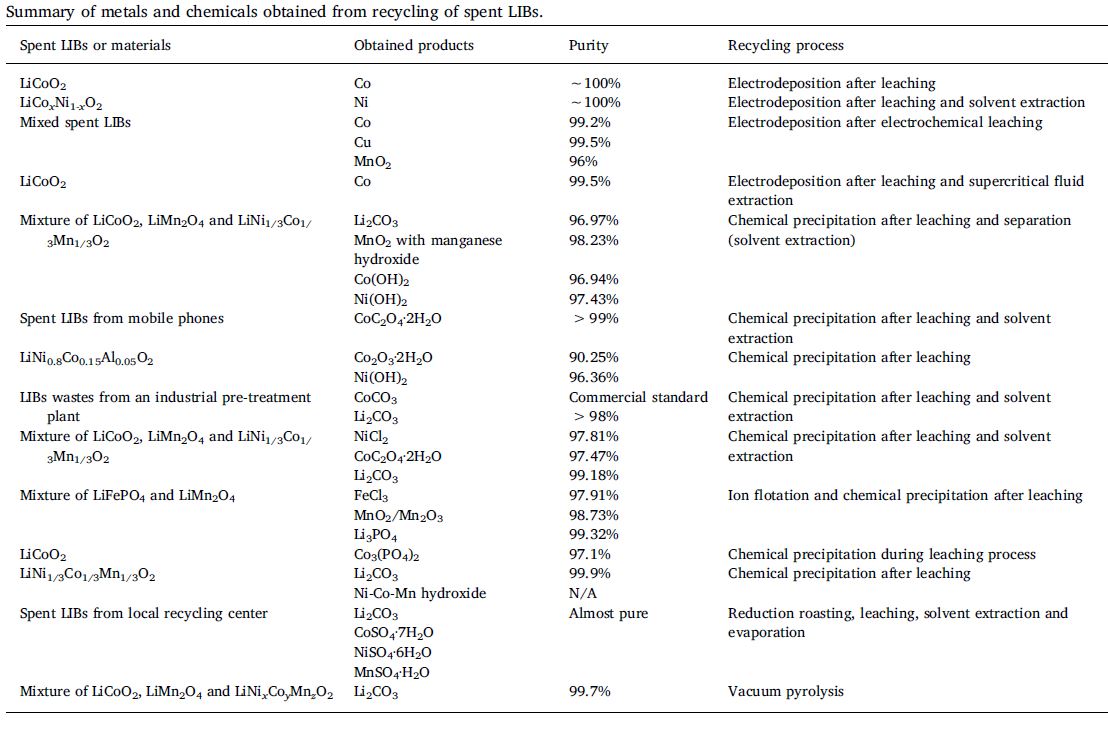 Fig. C: Summary of metals and chemicals obtained from recycling of spent Libs [3]

The table shows that both pure metals (cobalt, nickel, copper), and obtained products usable for a new production of cathode materials, in the form of carbonates, sulphates and hydroxides of various metals can be recovered from spent cathodes (LCO = LiCoO2, LFP = LiFePO4, LMO = LiMn2O4, NMC = LiNi1/3Co1/3Mn1/3O2, NCA = LiNi0.8Co0.15Al0.05O2) through various types of physicochemical processes.

The recycling process of the future

Currently, the recycling process is structured to obtain the basic elements and compounds used to synthesise the active materials, passing through the “black mass“, a pulp of cathode and anode materials still to be refined, with consequent waste of energy and other materials: 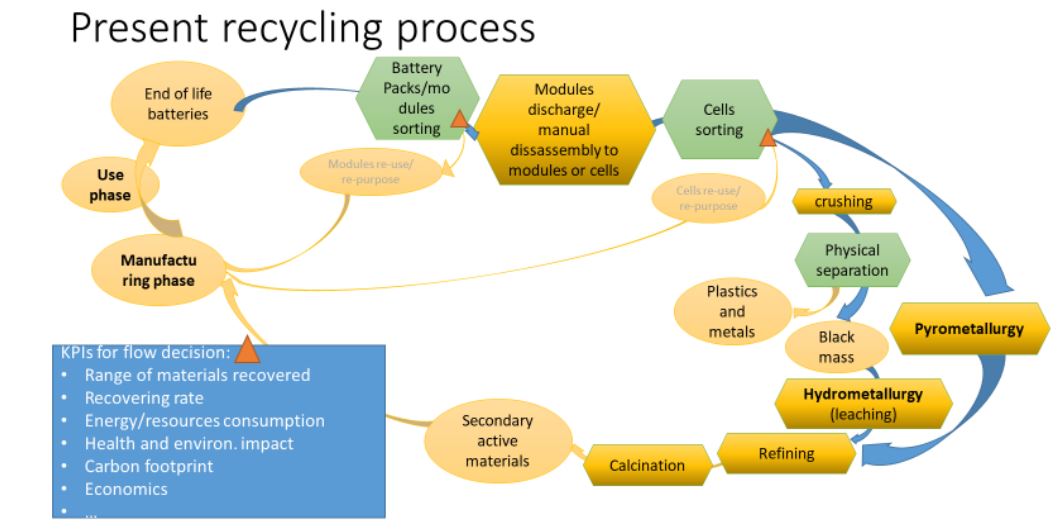 To make lithium battery recycling more efficient, the goal is “direct recycling” in which the active materials are directly recycled as much as possible, rather than being transformed into black mass, thus skipping the step of refining and re-synthesising of cathode and anode materials.

In addition, collection systems based on the health of the modules and cells will be introduced, which will facilitate and speed up the selection phase. Both at the module and cell level, we will then proceed to the subdivision into cells/modules that can be reused in other areas without being dismantled, or they will have to be recycled. As far as possible these will be subsequently discharged for energy recovery before the next steps.

Dismantling will then be facilitated by the “designed for recycling“, in which the mechanical design of the battery is done taking into account from the outset the dismantling that will take place at the end of its life.

The active materials will then be recovered and regenerated as much as possible (secondary active materials), while unlike current recycling, only the non-regenerable part will follow the transformation process into primary components (secondary raw materials). Both the first and the last can then re-enter the new cell production cycle, and to then start the cycle over again. 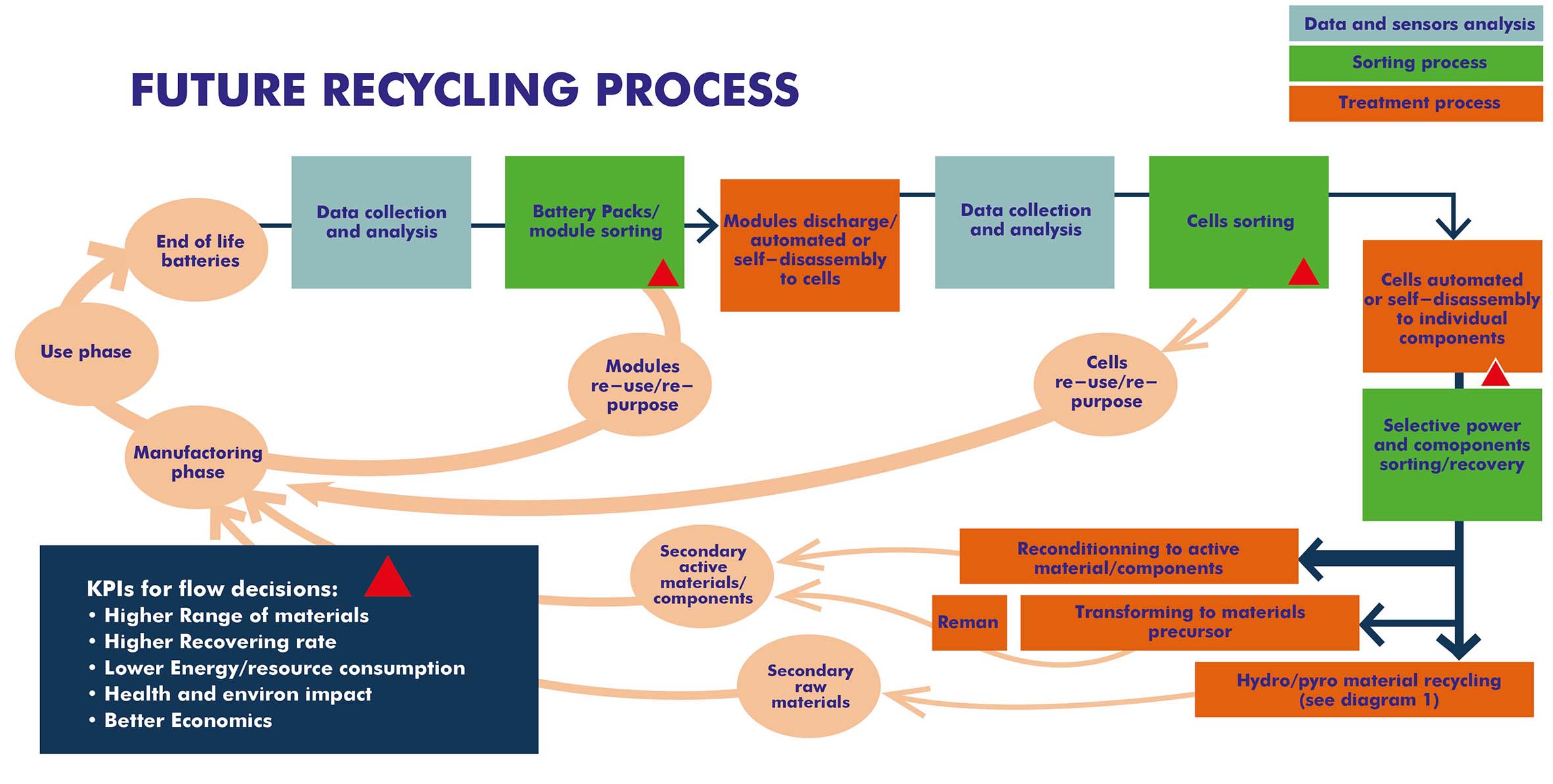 It is important to underline that the processes are all the more efficient when the initial material to be recycled is selected and with a very precise chemistry, from the point of view of recovery a selection of waste is therefore essential to optimise recycling.

To do this it is necessary to improve the traceability of the cells, through label, RFID or similar applications, which uniquely identify their composition and the state of life for any 2nd-life uses. Added to this is the challenge of finding convenient recycling processes given the constant decrease in cell costs due to increasingly high production.

Currently, the state of the art in recycling consists of different processes, often specialised in a type of battery in order to achieve high efficiencies. For example, to name the main ones:

Unfortunately, the recycling of LiFePO4 and LiMn2O4 is still limited by their low intrinsic material value, but these chemicals now cover a large share of the energy market. In fact, current forecasts see an increase in the production of LFP to the detriment of NMC, mainly due to the greater intrinsic safety of this material. The increase in volumes will correspond to a greater push towards its recycling, as well as greater ease in making “critical mass” to reduce the costs of recycling. 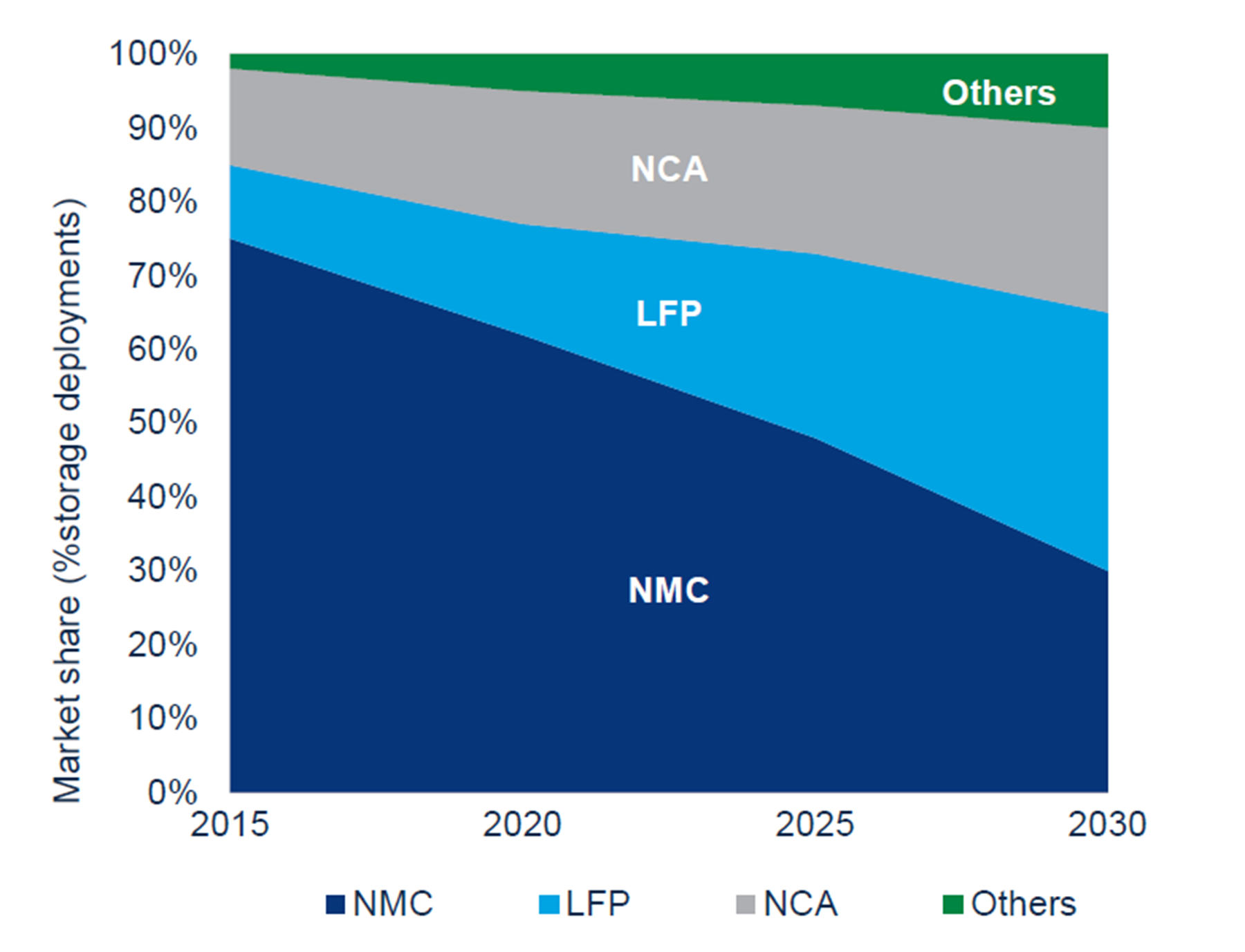 SECOND LIFE lithium battery: a solution that can be combined with recycling that should not be underestimated

There are increasingly more studies on the implementation of initiatives aimed at giving a second life to lithium batteries after the end of their life in vehicles (for example, for domestic use or energy storage):

But what exactly does it mean to recover a lithium battery by giving it a second life?

This is a most likely solution prior to recycling and results in recovering and using a battery that has reached the end of its life for an electric vehicle, in other applications such as energy storage.

For example, when the battery of an electric car loses 20% of autonomy, it is at the end of its life and needs to be changed; however, the spent battery can be reused for other applications that do not require full capacity and can exploit the remaining part of the battery that would otherwise be disposed of. This operation extends the total life of the battery and reduces the overall environmental impact of production, recycling and disposal.

How long does a lithium battery last in its second life?

Depending on the type of use, the second life of a battery can last even more than 10 years 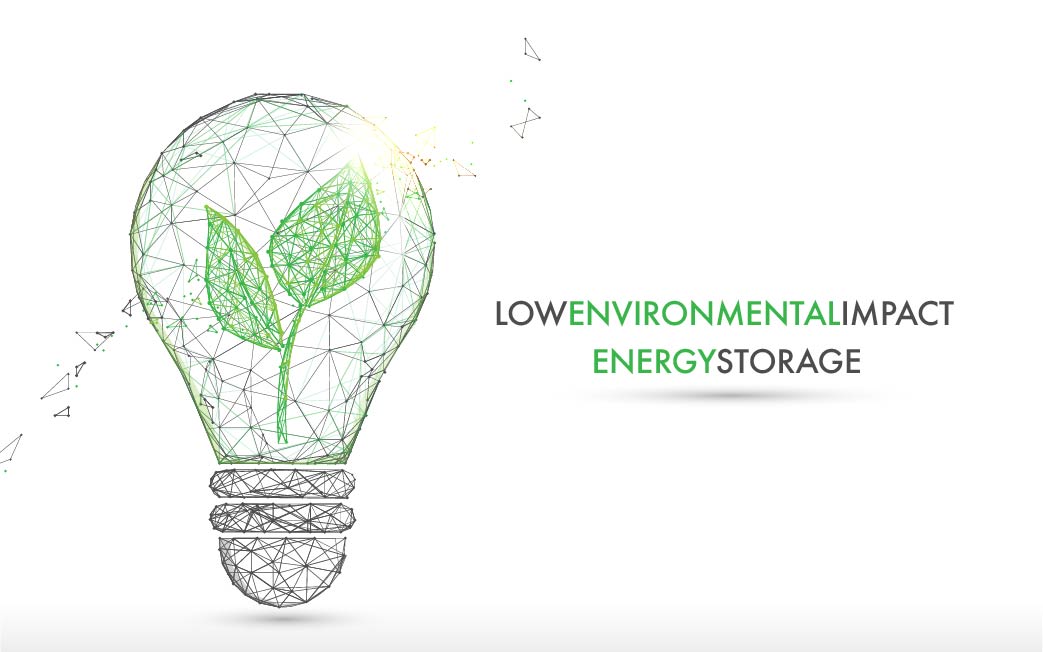 Let’s take a practical example: end-of-life lithium batteries can be used to power the utilities in homes and buildings. This makes it possible to improve the functioning of the electricity grids and, at the same time, to make greater use of the energy produced by renewable plants, by providing an energy storage system or to reduce the peaks of use of the national electricity grid through peak shaving, in which the battery charges when there are production peaks and provides energy when it is needed most.

In the automotive world, when a car battery has lost 20% of autonomy, this is already considered at the end of its life because it reduces the overall autonomy of the vehicle. In fact, however, the battery is not really spent, so it can be widely exploited for other energy storage uses.

On the contrary, many applications for industrial uses (e.g. logistics) are able to fully exploit the battery energy: thanks to the possibility of partial charging during breaks, these vehicles continue to use the battery up to a remaining capacity below 40% and consequently the second life is not necessary.

Second Life is also difficult to apply in the industrial market for another important reason: it is a very different segment in terms of models and characteristics of the individual packs, which among other things are not produced in large volumes, therefore, it is extremely complex to provide uniform re-assembly, which can instead be done in a much easier way on batteries dedicated for the automotive sector.

In fact, the automotive sector is able to exploit hundreds of thousands of packs all the same as each other, therefore it is easier to carry out studies to convert these packs at the end of their use on the car, giving them a second life in other contexts.

Flash Battery Batteries? Increasingly attentive to the issue of recycling and sustainability

In Flash Battery, the issue of sustainability is on the agenda and is a defining aspect of the corporate vision, geared towards green innovation in all respects. In fact, we are making our plant increasingly efficient and energetically autonomous, but the attention to sustainability also passes through the study of the product.

The added value given by the Research and Development department is very important, not only because it allows us to anticipate the needs of our customers by designing lithium batteries and systems at the cutting edge of technology, but also allows us to study solutions that are increasingly careful not to impact negatively on the environment.

“It is clear that the research area takes on a central value for a company like ours, called on to compete in a relatively young and all-innovation-oriented market. In this respect, though, we want to implement the elements of sustainability that characterise us and belong to that corporate social responsibility that is a stabilising distinctive factor and offers important answers also in terms of competitiveness”.

In our batteries, for example, we have chosen to use LFP chemistry, which in addition to being the safest and most stable currently on the market, is also completely cobalt-free, one of the materials that impacts the environment most.

Furthermore, thanks to the Research and Development department, which has over 35% of Flash Battery staff, we are actively studying production processes and increasingly eco-sustainable materials, which have a low environmental impact, and which allow us to optimise the various production steps and the design of the batteries.

We know that the road to a green society is still long and tortuous, but we are confident that research and investment in materials and skills directed towards efficiency and sustainability can make a great contribution.