Lithium is currently one of the most important components for the transition to electric vehicles, therefore subjects such as the disposal and recycling of spent lithium-ion batteries are becoming increasingly urgent, as the production of lithium batteries continues to increase, as will the amount of spent batteries requiring disposal in the coming years. Recycling them appropriately is essential, because they contain various precious metals and other substances which, if not suitably treated, could be harmful to the environment.

Let’s start at the beginning: how is a lithium battery structured?

To explore recycling lithium batteries in detail, we must take a step back and analyse first and foremost how the actual structure of the battery and its constituent components are put together.

The classic structure of a lithium-ion cell consists of: 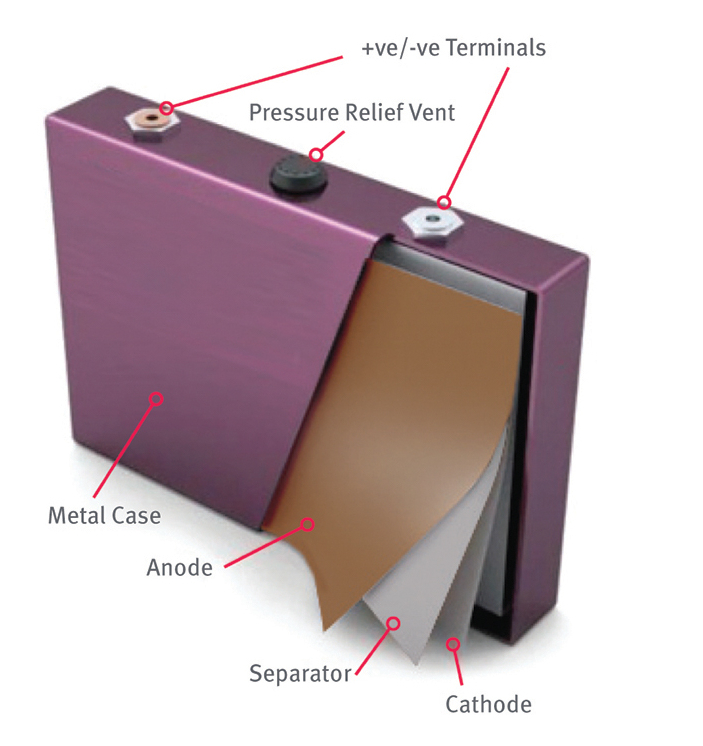 Fig. B: Example of prismatic cell structure – the type of cells used by Flash Battery [2]

Why is it important to recycle the components in a lithium battery?

Even though lithium batteries last much longer than traditional batteries, they deteriorate with use and over time, losing their ability to store energy (Ah and Wh) and supply peaks of power (A and W).

Over time, the consumption and deterioration of the electrolyte and anode/cathode active materials inexorably causes lithium batteries to have a lifetime that is partially predetermined, and partially dependent on the conditions of use (temperature, charging/discharging currents, operating voltage limits).

The electrical energy provided by lithium batteries has witnessed an unprecedented increase in recent years and, as a result of this increasing demand for batteries, there is a progressive requirement for minerals and the use of reserves is increasing (35% and 25% of mined lithium and cobalt respectively is used to produce lithium batteries [3]). However, mining limits are being reached for these materials, with a considerable increase in the environmental impact associated with mining itself.

For this reason, recycling lithium batteries is becoming increasingly important, especially considering the amount of batteries that will be produced and disposed of in the coming years. The resources that can be obtained through recycling can be considerable, and can prevent one aspect of pollution and partially compensate for the lack of resources available.

The development of new generations of cells fully considers these issues, reducing the percentage of cobalt. There are however also lithium chemicals, such as that which is mainly used by Flash Battery (LFP) which are completely cobalt-free. LFP technology, which is the safest and most stable to be sourced on the market, with an exceptionally long lifetime (over 4000 recharging cycles), is also the safest for recycling and has less impact on the environment.

How are spent lithium batteries disposed of?

Europe does not yet play a significant role in terms of recycling lithium batteries. Suffice to say that in the 2013-2014 period, out of 65,500 tonnes of lithium batteries only 1900 were recycled in Europe, resulting in the loss of valuable economic and mineral resources.

Currently this gap has reduced considerably, but globally it does not yet exceed 50%, a figure which is driven by China and South Korea, where most of the tonnes of spent batteries end up at the moment. Indeed at a worldwide level, in 2018 97k tonnes were recycled, of which 67k in China, 18k in South Korea, and only the remaining amount in Europe.

It is estimated that in 2030 it will be possible to recover between 400 and 500 million euro per year (at current prices), considering aluminium, cobalt, nickel and lithium alone [4]. It is also estimated that in 2025 spent batteries will constitute approximately 800k tonnes of minerals to be disposed of and recycled. 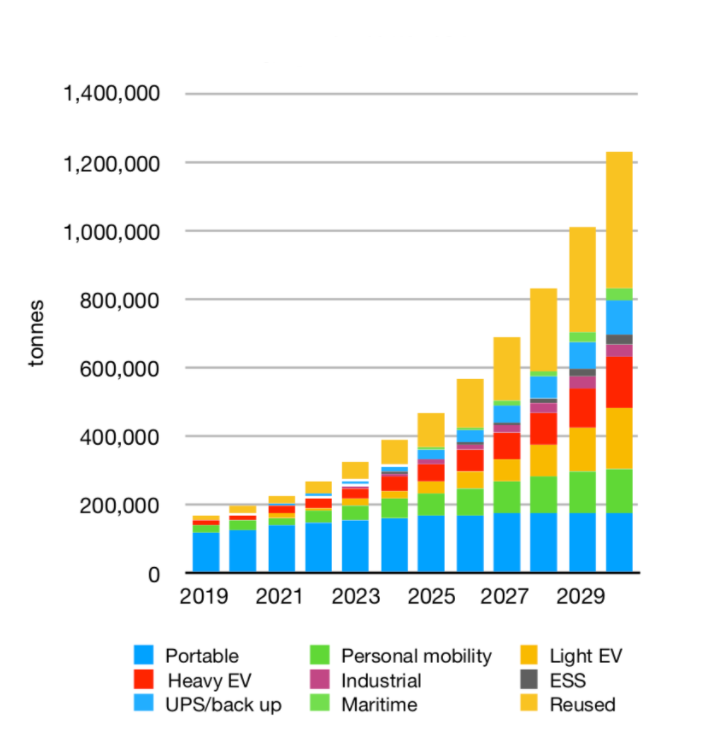 At the moment, the lithium battery disposal and recycling process is mainly driven by the market value of their components, and their availability in recycling centres

For this reason, in Europe (especially Germany where the majority of operators are located), aluminium, copper and cobalt are the elements of major interest, as they are recovered in the form of ‘black mass’ metal alloys (mix of everything smelted) requiring additional steps to produce material that can be used directly for new batteries. 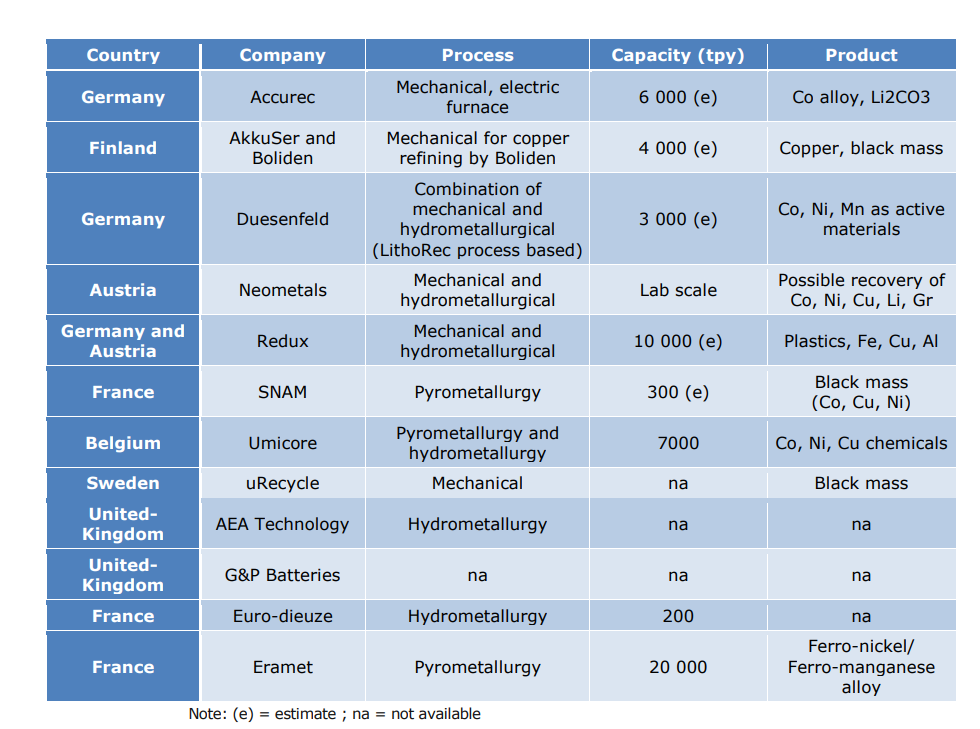 Fig. D: Assessment of recycling capability in Europe in 2019 [6]

In China and South Korea for example, lithium is mainly recovered in the form of lithium carbonate (Li2CO3), and anode/cathode active materials are recycled more efficiently thanks to the abundance of waste available. Indeed 70% of studies into recycling to date are carried out by China and South Korea, where all active materials can be recycled very efficiently, and the total recovery of materials is currently already higher than 90%. [7] 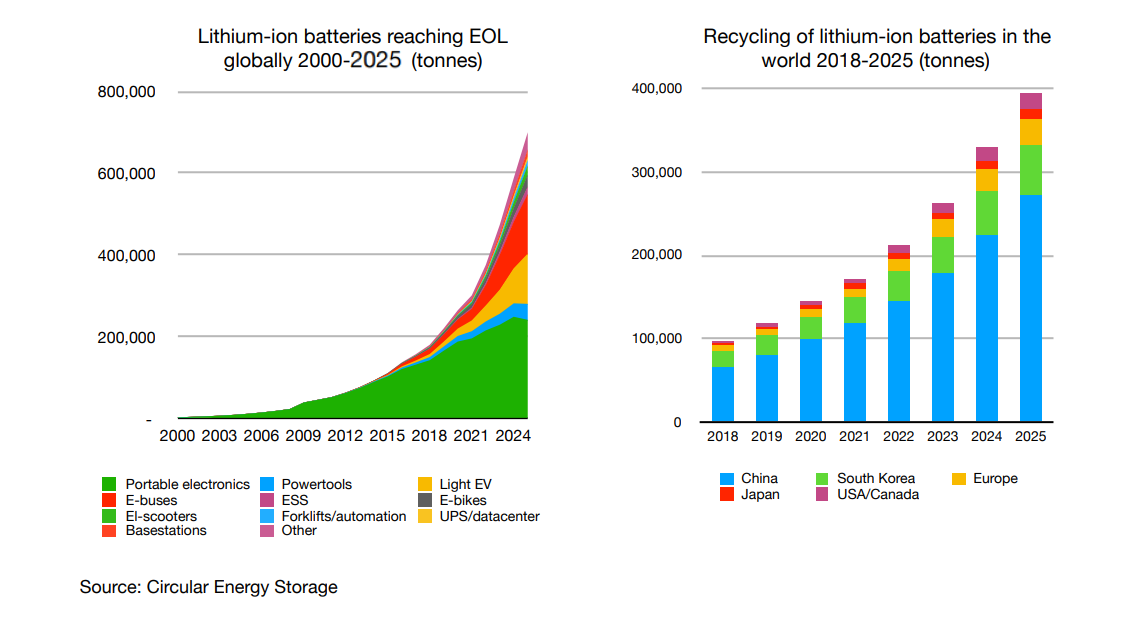 What standards should be followed when recycling lithium batteries?

The ideal process for recycling lithium-ion batteries should be able to recycle almost all of the battery components, and it is expected that in the near future more than 95% of the components will be recycled. However, as already stated, unfortunately the subject of disposal is today still being defined at a global level:

The main reason is that the world of lithium-ion batteries is still relatively young. Moreover, they last a long time therefore at the moment the volumes of batteries to be recycled is still very low, and do not justify significant investment in the creation of recycling centres (which can often be costly: recycling lithium and other constituent battery materials can cost more than buying the primary source).

However, the main players are taking steps so that the industry starts to produce in line with recycling principles, joining recycling organisations in national territories and researching the use of materials that are increasingly easier to recycle.

The role of COBAT in battery disposal

Flash Battery, for example, took immediate steps to meet current legal requirements to comply with legislative decree 188/08 and subsequent amendments, by becoming a member of COBAT (National Collection & Recycling Consortium) as early as 2015, in order to manage, dispose of and recycle batteries and accumulators.

Italian companies registered with COBAT are held to pay quarterly contributions that are proportional to the number of batteries they place on the Italian market, which will go to funding a battery recycling and treatment facility to get off the ground in years to come.

Responsibility for recycling batteries placed on markets abroad lies with the party importing the batteries into their country, and must fully comply with the relevant guidelines and legislation in force in that country.

In the European Union the collection and recycling of batteries and accumulators is regulated by Directive 2006/66/EC (applied in Italy via legislative decree 188/08 and subsequent amendments). This states that all member states must adopt the measures required to optimise and encourage the sorting of waste into separate categories, preventing these products from being disposed of as part of dry waste. This results in the preparation of special systems that enable batteries and accumulators to be deposited at collection points close to users, and recovered by producers free of charge.

Directive 2006/66/EC currently has the objective of recycling a minimum of 50% of spent lithium batteries by average weight, funding their collection, treatment and ultimately recycling. Unfortunately however, ensuring long-term sustainability will require much higher targets (the figure of 95% mentioned previously).

For this very reason, in the years to come the new lithium technologies will be implemented according to precise criteria in terms of:

The mission of Flash Battery: lithium batteries that are increasingly recyclable

The R&D department at Flash Battery is continually researching materials that offer maximum recycling opportunities and are also high-performing, while guaranteeing the optimal efficiency of lithium batteries, along with sustainability and low environmental impact.

Indeed as early as 2017, the Materials Engineer from our R&D department, Roberto Nasi, stated the importance of sustainable alternatives in lithium-ion battery production processes in this extract from an article in the Journal of Solid State Electrochemistry:

“In the industrial electrode production phase, current lithium-ion technology has the disadvantage of generally using materials that are polluting and undoubtedly costly, such as polyvinylidene fluoride (PVDF), a polymer that is mainly used to bind the constituent materials of cell electrodes, with the additional need to use N-methyl-2-pyrrolidone (NMP) as a solvent, which is highly toxic and also expensive.
As well as being hard to recycle, these materials are also problematic due to the stringent standards regulating their use, and the costs resulting from the need to remove part of them during electrode drying phases.
It would therefore be preferable to replace these materials with other products within the production cycle. One potential route to achieving a sustainable process is to incorporate materials into production processes that can be processed in water rather than organic solvents.
In fact in recent years efforts to find solutions to the use of these toxic materials have led to the study of different water-soluble binding systems, including rubber, carboxymethyl cellulose (CMC), polyacrylic acid (PAA), and polyvinyl alcohol (PVA)”.[8]

Despite the fact that recycling is still in its infancy, especially in Europe, it is worth emphasising that researchers and the main international players in the design and production of lithium batteries are committed to focusing on these issues, not just in terms of sustainable production, but also in relation to new supply chain possibilities for raw materials.

Remember that the European Commission has approved, based on the EU rules on support to member countries, an Important Project of Common European Interest “IPCEI“, jointly funded by Belgium, Finland, France, Germany, Italy, Poland and Sweden, to support research and innovation in the common European priority sector of batteries. 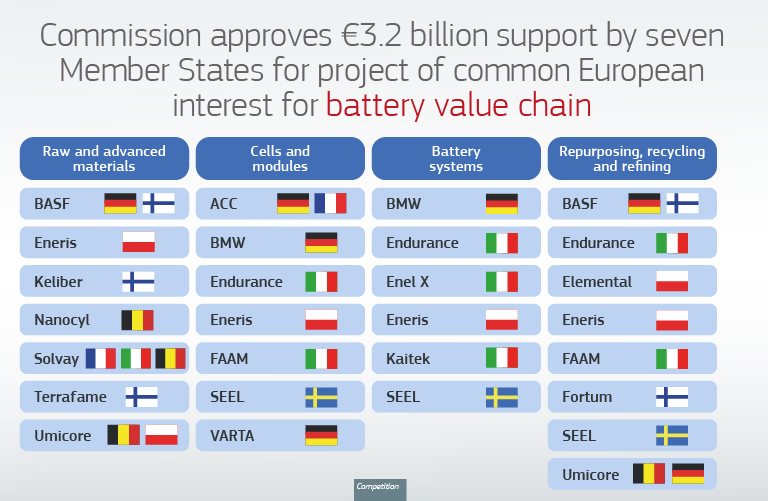 Italy, for example, is at the forefront of research into a new technology: COBAT, along with CNR-Iccom from Florence, recently launched a technological patent with a hydro-metallurgical process, which enables the metals contained in batteries, such as lithium, cobalt and magnesium, to be recycled more efficiently.

Why is this necessary?

Not just to increase recycling to help the environment, but also because our continent is lacking lithium and rare metals. If in Europe we were relying on our own mineral resources alone, we couldn’t meet market requirements successfully.

This means we need to recycle metals to reduce our reliance on China and South Korea, where most battery cells are currently produced.