Risks associated with lithium: can you really trust a lithium battery?

What would happen if your vehicle’s lithium battery set on fire?

The safety of lithium batteries has always raised concerns amongst end-users. Unfortunately, we are hearing of more and more cases of accidents caused by exploding lithium batteries, which suddenly set on fire while they were being used or during charging.

The Boeing case, which happened in 2013, (Focus wrote about it  here and also CNN) , is one of the most famous ones, what must the cost have been to Boeing in terms of its image and the expense of grounding the 50 incriminated Boeing 787s???

You have probably also heard about many other cases of lithium batteries exploding and setting on fire, from Tesla cars to electric coaches, and even electric scooters that resulted in entire homes burning down, unfortunately leading to several deaths.

Why did this happen?

Who is responsible for these disasters?

Do you want to avoid the possibility of your machinery and your brand image being marred by these accidents?

In this article, we reveal the 3 key factors for the safety of lithium batteries:

Lithium accumulators come with hundreds of different chemical structures, but there are 3 main ones:

Our aim is to identify the safest lithium chemical structure for your vehicle in order to prevent unnecessary hazards when using lithium batteries.

In this table sums up the intrinsic elements of each chemical structure in terms of its safety and its properties.

Decomposition temperature: the higher this temperature, the more difficult it will be to enter decomposition conditions and so the lithium battery cell will be safer. If refers to a situation where a rise in temperature leads to a condition marked by an additional increase in temperature, such as a domino effect created between the cells inside the battery, also known as Thermal runaway. 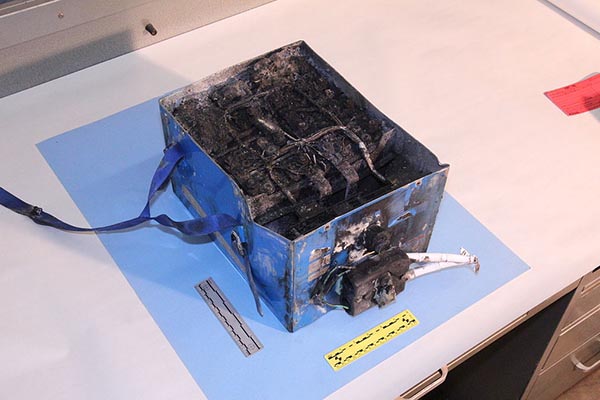 Heat release: measured in Joules per gram and indicating the energy that the cell of the battery is able to release in the form of heat, and so contributing to the increase in temperature. The lower this rating, the safer the lithium battery will be. An increase in temperature is precisely what causes the most damage: it might not be the actual cell that sets on fire, but a component near or surrounding the battery, such as those made of a plastic material.

We tried to replicate and test this data using a practical example in this video-test.

Nail penetration tests are an excellent example of safety testing for lithium batteries and are carried out by simulating a short circuit inside the cells to see what happens next. Our R&D lab engineers often resort to penetration testing, as it gives excellent feedback relating to cell safety.

In this test, the sample battery is penetrated with a nail.

The perforation simulates a short circuit inside it so we can see if the battery catches fire or explodes.

The probability of a cell being penetrated during the normal use of a lithium battery fitted on electric vehicles and industrial machinery is very low, but we take this test into consideration because it simulates the worst thing that could happen to a cell, i.e. an internal short circuit as a result of a manufacturing fault or abuse.

As you have just seen, the reactions to the  nail penetration test are completely different, both in terms of the propagation time and of the temperatures reached.

If we imagine these cells positioned alongside one another inside the lithium battery pack, it is clear that the less safe chemical structures will reach very high temperatures (> 550°C in the case of the video).

These high temperatures can trigger a chain reaction with the other cells nearby, causing the entire battery to set on fire; the battery used by Boeing is a good example of this. (*see photo of Boeing battery above).

Type of assembly of lithium accumulators

The assembly is another fundamental issue for ensuring the intrinsic safety of the battery, and more specifically, the number of parallel cells inside the pack is a key element. We already looked at this concept in our article describing the different types of lithium cells.

Staying in the world of lithium batteries for electric vehicles  and industrial machinery , the demand here is for generally high capacities ranging from 100Ah to in excess of 1000Ah.

Earlier, in the video, we saw how a single lithium-LFP battery cell remains safe even in case of an internal short circuit.

Do lithium-LFP batteries stay safe in all conditions?

Many manufacturers of lithium batteries assemble battery packs consisting of small cells and as a result they have to fit a larger number of cells in parallel.

Take a 400Ah battery, for example.

What happens if one of these 8 or 130 cells short-circuits?

The lithium cell that short-circuits will have to absorb all the energy for the entire parallel string, i.e. 8 or 130 times its capacity.

As a result, the cell temperature will increase exponentially, endangering the safety of the entire battery or the entire vehicle.

Our laboratories have simulated and tested these safety issues and came to one conclusion: Flash Battery  consist of maximum 4 cells in parallel in order to guarantee their safety in any situation.

The third and last aspect for guaranteeing the safety of the internal lithium battery pack concerns the electronics controlling the battery: the battery’s brain. Over the coming months, we will publish an article about the BMS, its features and its functions. For now, we are simply going to describe its safety features.

The main job of the electronics is to monitor the voltage and temperature of the individual cells.

It also has to interact with the vehicle and battery charger in order to stop it charging and discharging if a critical situation occurs, tripping the general remote contactors, if necessary.

The difference between manufacturers of lithium batteries lies in how the control electronics work in hazardous situations.

Traditional systems monitor the temperature every 3-4 cells and not always at the right point.

We initially set up Flash Battery  to address critical aspects linked to the electronics limiting the reliability and safety of lithium batteries; this is where it all got started for us.

The temperature measurement needed to be done in a more widespread manner and at the right points in order to check the contact resistance; this is why Flash Battery batteries have two temperature sensors for each cell. For example, a 96V battery, i.e. with 30 cells in series, has 60 heat sensors.

With more than 10.000 batteries around the world, Flash Battery is setting important records and has never reported any safety issues with its products. This is why they are chosen by multinationals where avoiding fire risks is vital, such as paper mills.

Ask our engineers for an initial evaluation free of charge

REQUEST A FREE EVALUATION OF YOUR PROJECT