Flash Battery was asked to testify how it went from being a start-up to a Made in Italy company, now a reference point in Italy and abroad in the sector of lithium batteries for industrial machines and electric vehicles. During the interview, Marco Righi recounted Flash Battery’s direct experience on the theme of sustainability, understood not only at an environmental or product level, but focused on the wellbeing of people, and shed light on the development and future of the electrification market. 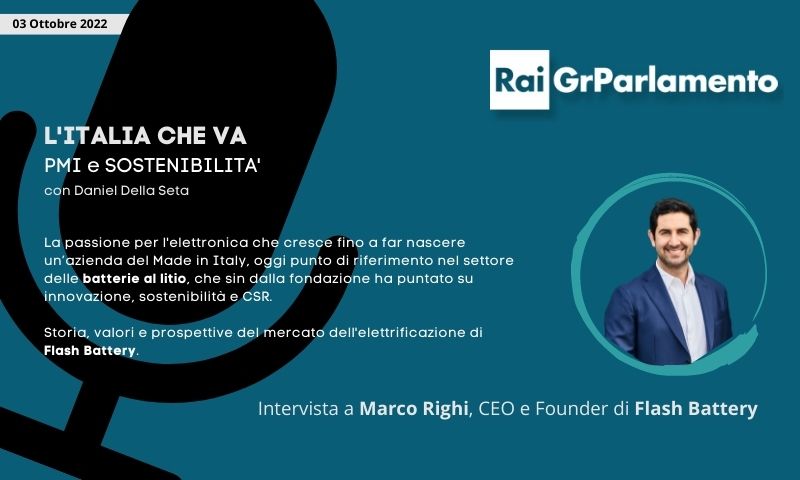 Daniel Della Seta: The story we are telling today is that of a team of young, dynamic people who travel a lot, develop technologies and realise tailor-made projects with high added value in the production of lithium batteries for industrial machines and electric vehicles.

These people are young, they are on average 30-35 years old and 30% are engineers. They realise and remotely monitor lithium batteries supplied to manufacturers of industrial machines and electric vehicles with medium production volumes and high customisation requirements.

Basically, the company’s customers are in important sectors: automation, robotics, logistics, construction, boating, aerial platforms, electric vehicles, and even agriculture and airport vehicles. They are located in Sant’Ilario d’Enza (Reggio Emilia), and everything started 10 years ago thanks to the CEO and founder Marco Righi, who is our guest today and who, together with Alan Pastorelli (CTO and Co-founder), gave life to Flash Battery. I say good morning to Marco Righi.

Marco, today we can say that Flash Battery is a reference point for the production of customised lithium batteries for manufacturers of industrial machines and electric vehicles. This came about because there has been a major development in the sector in recent years.

Marco Righi: Our business was born out of a passion for electronics: mine and my childhood friend Alan Pastorelli’s, and it turned into a company when we found something to work on. From a young age, we liked to design, create party light controllers and modify Play Stations. Then, around 2009, when we saw the first lithium batteries coming from China, which few people used at first because they seemed unsafe, we decided to ask ourselves why they were malfunctioning; we realised that electronics could make a difference, and from then on, in the garage, we started to design the first prototypes.

Daniel Della Seta: From a garage to the creation of a company policy that commits to a very interesting principle based on the 4Rs (reduce, reuse, recycle and recover). How?

Marco Righi: We are in an industry that deals with sustainability issues, because we support the transition from endothermic to electrification, so we have to do it in a sustainable way. So we start by looking at ourselves ‘at home’: we have created an almost entirely self-sufficient company headquarters, thanks to the use of photovoltaic panels, and we have no fossil fuels, so everything is green; we also try to be as sustainable as possible in our policies towards our employees, because we know that sustainability is not only environmental.

Daniel Della Seta: Today, your lithium battery is one of the best-selling batteries in our country, with a proprietary balancing system (BMS) that is 20 times more powerful than other lithium manufacturers. Are you proud of this?

Marco Righi: Yes, that is what we have always stood for and where we started from. Our core competence was electronics, so we created a system that was different to others currently on the market; it is already patented in Italy and has a European patent pending. Yes, it is our beating heart.

Daniel Della Seta: You have also won an important award conferred on you by President of the Republic Mattarella, the Premio dei Premi per l’innovazione, and for the third year in a row you have been recognised as one of the best under-40 companies in Emilia Romagna. Now what expectations do you have and what possibilities may open up for you in terms of relations with foreign countries and in Italy? With which subjects? Your Industry 4.0 is the basis of the fourth industrial revolution.

Marco Righi: For us, the future is market expansion. At the moment we are working more and more throughout Europe and at the same time we are looking at new technologies coming up. At the moment there are no big horizons outside of lithium, which is a technology that evolves very quickly and moves big investments, starting with automotive, although we are not in that market segment.

Daniel Della Seta: So if you were to give advice to young people approaching this world, in which area would you advise them to specialise and with what job prospects?

Marco Righi: To young people I can only say to follow their passions. For us, that is what has made the difference, because passion makes it possible to get almost anywhere. If I have to speak as an entrepreneur, the figures that are hardest to find today are precisely the technical ones. They are looking for mechanical engineers, electronic engineers, electrical engineers, softwarists, computer scientists… In short, companies today need these profiles.

Daniel Della Seta: It’s a nice message from a young entrepreneur under 35 to the 20-year-olds of today, with an important skill in identifying these market niches, where even Italian genius has made its way and, as we have seen, has managed to set a benchmark in the lithium battery sector, as in the case of this all-Emilian company.