Remote Control. The need to be able to proactively and promptly act by using all possible technologies.

Remote. Have you ever wondered just how much technology goes into such an apparently simple word?

Let’s think about it: “remote” means far off, but not necessarily difficult to reach. Instead, it implies if takes a long time to get there. And so here comes that magic little word that explains the link between remote and technology: time.

Bypassing the obvious issues linked to current limitations imposed by measures to stop COVID-19, time has always been paramount for any business around the world. Or to be more specific, making the best use of time. For example, machine downtime slows down or even stops production and so it is the absolute opposite of making the best use of time. This explains the need to take prompt action, of using every possible solution made available by technology.

Solutions that not only allow us to overcome distances in space and time, but to even anticipate and prevent events potentially going against our making the best use of time.

For any business, making the best use of time is a sine qua non, a tool specifically developed depending on its needs and the different phases involved in its organisation and production. And, without exception, all businesses have their own specific tool to ensure their after-sales service is top-notch. Let’s take the example of Flash Battery, which can be considered “textbook” standard in many ways.

Firstly, as it is a relatively young firm, for the fact that it developed right away a form of customer service integrated to such an extent it can be considered an extension of its production. 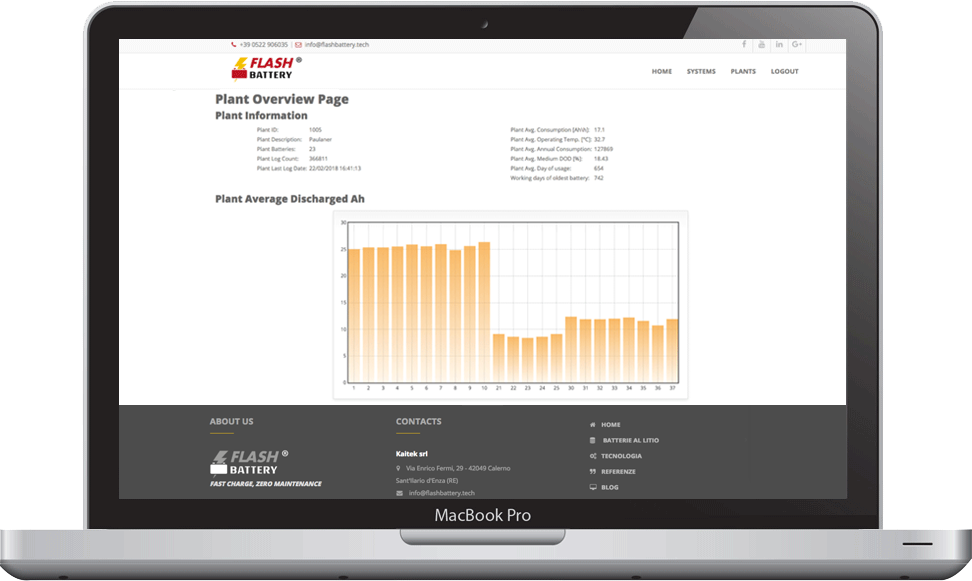 What do we mean by that? Simply that the Flash Data Center by Flash Battery was designed together with the batteries by the Emilia-Romagna-based company themselves , making it a tool that can be used by OEM customers and end users, as well as by Flash Battery itself to provide much more than just customer service. It is used to carry out genuine predictive maintenance, including the ongoing control of all those parameters that ultimately enable the correct operation of the machine by means of correct battery management. Being able to prevent a potential fault is almost a by-product, because it is just one of the aspects that can be monitored, and taken altogether they give you the end result: the optimisation of the operation, also in terms of time, of the machine served by Flash Battery’s battery.

Let’s take a look at a few examples: the Flash Data Center allows daily monitoring of the exact use of every single lithium battery fitted on any industrial machine or electric vehicle, as well as the data on machine use. Any anomaly recorded sends a warning to the Flash Battery Service team. What’s more, you can also check for any anomalies associated with the incorrect management of one or more phases of the machine (actual discharge times, charging times, days of use, average consumption and temperatures reached) and the analysis of this data can be used by the manager of the fleet of machines, or even by the individual machine operator, to correct or simply improve the performance of the machine itself. In the most extreme cases, the Flash Data Center remote control system by Flash Battery can be used to identify improper machine use by the machine operator (which has an impact on another pivotal issue in any company: safety).

So, as we said, the Flash Data Center is an integral part of the batteries from Emilia-Romagna, supporting them until the end of their working life. And what about the convenience of being able to consult and analyse all this data via a web portal, that can be accessed wherever you are in the world? The ultimate example of how technology has brought the word “remote”, and all that it entails, closer to us in terms of both space and time. The Service engineers at Flash Battery check every single battery in operation in any country around the world, from the comfort of their desk at… Sant’Ilario D’Enza, just outside Reggio Emilia. And we are talking about more than 5,000 lithium batteries working on over 200 different types of machine, often with highly customised systems. On to another impressive figure: 93% of faults were dealt with in advance and proactively in order to reduce unnecessary and inefficient machine downtime. There again, machine fleet managers can do the same themselves, by monitoring their fleet without even leaving the office.

In 2018, Tesla chose Flash Battery and its remote battery monitoring for the Tesla Destination Tour. It was the first fully electric tour, when the most famous electric supercar in the world, the Tesla, completed 12 stages along the length and breadth of Italy.

Flash Battery’s remote monitoring gave the TDT information about the battery condition, average discharge depth, average power consumption, operating time and a host of other information shown on the on-board LCD display and remotely through the dedicated portal.

Many OEMs of industrial and electric machines have come to appreciate the importance of the information that the Flash Data Center provides, which can be used to significantly improve machine performance.

ATA, an Italian manufacturer of tractors for airport and industrial applications and equipment for ports and airports, completed two tests on the new Zac100E pushback vehicle fitted with Flash Battery’s 80 V 400 Ah batteries at Venice airport, Italy, at the end of 2019. The vehicle was used to move two planes across the apron and was the first vehicle of its type powered by a lithium battery.

In the first test, the Zac100E pushed a fully loaded 75t Air Portugal plane and a 65t Aeroflot plane more than 200 metres from the apron to the area where the plane is able to move under its own power. The vehicle, with no load, then reached the charging station at a distance of two kilometres away.

ATA received the battery data automatically through the Flash Data Center portal during each cycle of charge and discharge, avoiding transfer and on-site maintenance costs. What’s more, the engineers at Flash Battery provided real-time support, as they were also able to monitor the battery remotely.