Territory, traditions, values, technology.
When all this (and much more) is shared, then the partnership is destined for success

There is a place in Italy where mechanical traditions and technological innovations go hand in hand, creating a melting pot from which companies that have become world leaders in their respective fields were established and have developed.

This kind of “environment” is not only a melting pot capable of generating cutting-edge ideas, but also relationships and partnerships that will lead the parties to joint growth and international success. As in the case of Platform Basket and Flash Battery. The first is an OEM of aerial platforms (mainly tracked models) that are used in a wide variety of sectors (construction, industry, landscaping, railway maintenance, etc.), from Poviglio, a municipality that overlooks that area (provinces of Reggio Emilia, Modena, Parma, and Bologna) that for decades has been nurturing, cradling, and growing companies that are the envy of the world; the second from Sant’Ilario d’Enza, also a Reggio Emilia municipality just a few kilometres from Poviglio, a company led by two young entrepreneurs who in just a few years have made it one of the most advanced manufacturers of lithium batteries for industrial machines and electric vehicles, with proprietary technology. 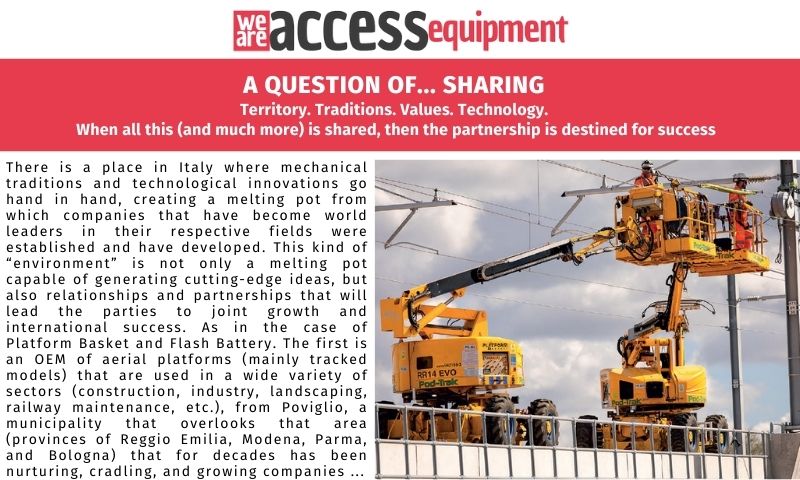 Whether it was the short distance between the two companies (less than 20 kilometres), or the common traditions and culture, or the sharing of some (all?) key values of the company philosophy, it was clear that the meeting was “written in the stars” and led to the subsequent partnership that has now lasted for several years. “With mutual satisfaction”, says Carloalberto Molesini, founding partner together with the Scillia family of Platform Basket, as well as sales manager. “We have been using Flash Batteries for all our models, both full electric and hybrid, for years. We can say that we have grown together, not only in business, but also (and especially) in technology. We started developing electric-powered platforms back in 2010, from an initial experience with lead-acid batteries, which, however, gave very poor results in terms of autonomy against considerable maintenance and environmental issues”.

“In 2012, Marco Righi and Alan Pastorelli founded Flash Battery, a pioneer company in lithium battery design, just a few kilometres from us, and we said to each other: “Why not try adopting that type of battery on our platforms?” So we started collaborating, initially with the development of small to medium hybrid models, with low energy requirements and therefore ‘simpler’. As the energy capabilities of the batteries evolved, led by Flash Battery R&D, we electrified even our taller platforms. Platform Basket was the first OEM to offer hybrid and then full-electric aerial platforms. This was something we could only achieve with a technologically solid partner who shared our same values“.

“It was clear from the outset that we shared the same values: we have always developed our batteries with a focus on the highest quality, which results above all in reliability and durability. The same features that characterise Platform Basket platforms. Designing the right battery for each of their models was therefore a process that developed naturally over time, and continues to this day, following the technical and technological evolution of both batteries and machines,” explains Matteo Marmai, Business Development Manager at Flash Battery.

But how does a Platform Basket aerial platform powered by Flash Batteries come into being? “Thanks to all these years of partnership and the experience gained in gradually electrifying all the models in the range, today we can safely say that we have solid know-how that allows rapid development of both new models and upgrades of previous ones”, explains Marco Bolentini, Platform Basket’s electronic systems development engineer, who continues: “in general, however, the development of a platform’s battery pack always starts with an analysis of the power required to move the machine and the integration of the battery pack into the layout of the machine. Its energy capacity and size, in fact, are the two initial “critical” parameters. These first two points are followed by the development of the electronic interface, the charging and diagnostic system and the safety system. The only way we can be sure that our platforms will be adequate in terms of performance, including their autonomy, will be reliable and the whole platform will be easy for the end user to use and manage is by customising the battery pack to the needs of the platform and optimising all these systems and parameters”.

These first pillar-values (design customisation, reliability, performance, simple management for the end user and adequate operating autonomy) are followed by other values that the adoption of a lithium-ion Flash Battery brings with it in a, we may say, natural way: the absolute absence of maintenance operations and the reduced or zero environmental impact that an electric platform ensures thanks to the zero emissions of both pollutants and noise.

In addition to tracked spiders Platform Basket has developed a Railway machine for combined road/rail use, a very selective and strict sector in terms of regulations and safety. Today, Platform Basket’s railway equipment is known the world over and has obtained certifications from the main European railway authorities as a safe and suitable machine for carrying out construction and/or maintenance work on railway power lines.

“These machines are expected to operate in environments that often have ever-increasing restrictions not only in terms of safety but also in terms of noise and pollutant emissions. In this niche segment, being able to offer full electric machines has been particularly important,” explains Molesini. “The development of our smaller railway models did not involve any major technical problems, as the power was limited to 24 Vdc. And it was on the medium-high machines that Flash Battery’s collaboration and technical support proved invaluable: it was necessary to switch to 48Vdc voltage, which required modifications to reduce the dispersion involved,” Bolentini continues. “But it was the transition to the new cells that Flash Battery developed (and which Platform Basket has adopted on all its AWPs, ed.) that made the real performance leap possible on these machines: we are now able to offer a full electric Railway model that can compete with a similar model with an endothermic engine in terms of efficiency, performance and range”.

“Initially, the electrification of Platform Basket’s railway models prompted us to change mainly our battery-related accessories,” Marmai continues. “The first model developed was equipped with a single 8+8 kWh battery pack for 25.6 V with master control. The second model, instead, was already equipped with batteries in parallel without the need for master control. The other challenge was to “it” the battery pack into the layout of these machines, which was complicated by the presence of elements such as rail anchors, tyres and an insulated mechanical boom used for working on the high-voltage lines. We were able to find the right solution thanks to the modularity of our batteries and our ability to customise their shape and size according to the space available on the machine”.

One of the leitmotifs of Platform Basket’s participation at Bauma 2022 will be a disruptive “green turnaround“: reducing the environmental impact of MEWPs (almost) to zero means that all machine components must contribute to this goal, including the batteries. “The ecological turnaround that we are facing and will unveil at Bauma 2022 has become a real founding value of our company,” explains Francesca Mora, Platform Basket’s marketing & communication manager. “A value shared with Flash Battery that is travelling and growing with us along this path that involves our entire range of platforms“.

The many whys of Platform Basket

“The decision to rely exclusively on Flash Battery as a battery supplier is based on many factors. First of all, Flash Battery is one of the few manufacturers to have developed a proprietary modular technology that allows extreme customisation of batteries. Their R&D, furthermore, is lively and dynamic: for example, with the adoption of the latest cells they have developed, we have increased the autonomy of our AWPs by up to 15% and adapted this technology also to models already in production, without having to make any changes. They have also developed a proprietary battery management software, the Flash Data Center, which allows us to record data anywhere in the world and transmit it digitally to their service technicians. Last but not least, they guarantee a high quality of the lithium component, which comes from the same geographical area and undergoes regular quality tests,” said Carloalberto Molesini.