From smartphones to industrial machinery. Thanks to recent refinement of technologies, lithium batteries are offering indisputable performance and advantages.
This has expanded their range of application in many very different — and challenging — areas beyond mobile devices.

The last few months of 2019 were definitely intense for Flash Battery, a Reggio Emilia-based company that in just a few years has made lithium batteries — in addition to its manufacturing know-how and experience in managing and solving arising issues — its source of growth, with few equals in the industrial business scene.

Not many saw this opportunity despite the huge “neon arrow” pointing the way, namely, the 2019 Nobel Prize in Chemistry awarded to none other than the inventors of the lithium battery (John B. Goodenough, M. Stanley Whittingham and Akira Yoshino). However, just as History with a capital “H” teaches us that the most revolutionary inventions are often a target of mass ostracism to their diffusion, it also teaches us that for each of those inventions there was a group of people that didn’t throw in the towel and in the end succeeded in bringing them into our homes. 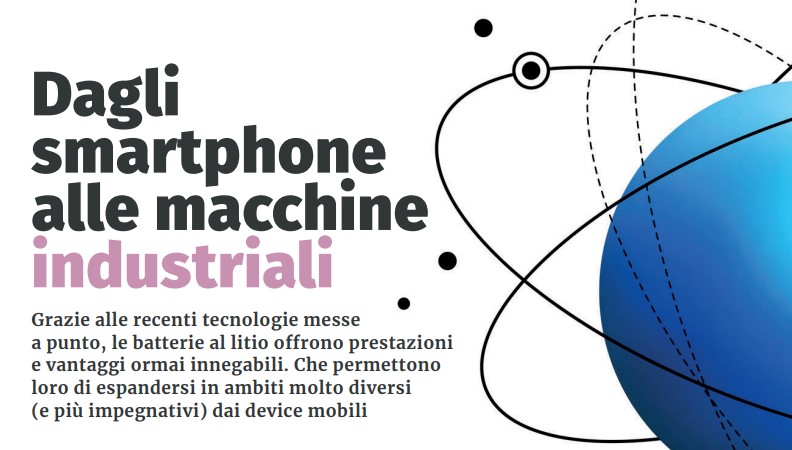 Electricity is one example. Things go pretty much the same way at the industrial level as they do in everyday life: until a few years ago, nobody thought that internal combustion engines would ever see the end of their road in some industry fields. And now, here we are, with companies like Flash Battery to prove on the field that electrification can fit the bill if the right technologies are applied. Coming back to those last few months of 2019, the Emilia-Romagna-based company was the centre of attention in a series of events whose primary intent was that of turning “lithium” into an action verb. At the GIS (Italian Lifting and Heavy Transport Show) in Piacenza, the company participated both as an exhibitor, presenting its innovative lithium batteries featuring increased energy density and work cycles for application in lifting equipment and mechanised logistics, and as an invited speaker at technical seminars.

CEO Marco Righi was, in fact, a speaker at the conference on green technological innovation in the lifting, industrial/port handling, and heavy transport areas. His talk focused on the transition from lead-acid to lithium batteries.

After that came the CIBUS TEC show in Parma, where Flash Battery decided to participate for the first time with the aim of connecting with operators working in the packaging and logistics areas of the food and beverage industry. The role of AGVs (Automated Guided Vehicles) in these areas is becoming increasingly widespread and crucial. Flash Battery has nearly ten years of experience in this particular field thanks to its collaboration with Elettric80, a manufacturer that has been using Flash Battery lithium batteries in its products since 2013 and became a partner of Flash Battery in 2015. Technology was fine-tuned as a result of the collaborative work with Elettric80, giving rise to two innovations for AGVs: induction charging and the Flash Data Center.

Induction charging ensures greater efficiency to the system while the Flash Data Center is a portal for automatic and daily remote monitoring of every battery installed around the world. “We know way in advance when maintenance is needed and, thanks to the Automatic Alert System, we can take action on possible malfunctions, preventing critical situations before they occur for guaranteed high system efficiency”, explained Marco Righi, CEO of Flash Battery. However, trade shows are not the only occasion for Flash Battery to spread the concepts of electrification, lithium battery power, and sustainability.

For example, in November the company hosted 42 students as part of “PMI Day – Industriamoci”, an open day for young students held by Unindustria member SMEs. “We mainly talked about energy and renewable sources”, underlined Righi, “because this is a topic that students in this age group are really passionate about. Instead, when high school and university students visit, we cover more scientific and technical aspects that relate our activities with what they are studying”. The students asked many questions about the company and lithium batteries, but also about the preparation needed for entering the workplace especially in terms of “soft skills” which, as Righi said, “make a collaborator a good resource for any organisation, regardless of his or her role”.

Flash Battery is playing a social role not only through the Uniundustria Bologna project but also at a European level. In fact, the company is one of the 17 European organisations that have given life to the Important Project of Common European Interest (IPCEI) jointly funded by Belgium, Finland, France, Germany, Italy, Poland and Sweden to support research and innovation in the common European priority sector of batteries. The aim is to develop advanced, groundbreaking technologies that meet performance, cost and safety objectives that are currently not met in the lithium-ion battery sector.

Why is lithium better (than lead)?

Lithium is better than lead because:

The first-brick laying ceremony at the new headquarters last September marked a new era in the history of Flash Battery. The new headquarters in Sant’Ilario d’Enza will be five times bigger than the current site in Calerno, where Kaitek Flash Battery (which has a turnover of €13.2 million, trading partners in 54 countries and had 54 members of staff in 2018, with an average age of 33) was founded in 2012 by Marco Righi (now CEO) and Alan Pastorelli (technical director).

The new complex will stand on a plot of land spanning more than 20,000 m², with 1,500 m² covered by offices and 3,200 m² by production areas. A further 5,000 m² are available for potential subsequent expansion. All industrial and production activities will take place in the new headquarters, which will also be home to the Research, Development, Innovation and Marketing departments, not to mention the sales and administration offices.

€6 million have been invested in the construction of the facility, which will have room for more than 150 members of staff and is due for completion in March 2020. The new headquarters were designed according to eco-sustainability criteria. No fossil fuels will be used and a photovoltaic system will satisfy most of the company’s energy needs.

It looks like a chemical formula but, actually, it sums up what will be one of the most important evolutions in the area of industrial machine electrification.

At a few weeks from the opening of SaMoTer, the Verona trade show spotlighting earth-moving machinery, we think it is useful to return to a few concepts expressed by Marco Righi, CEO of Flash Battery, at the conference he participated in as speaker.

“Lithium batteries are a pivotal innovation in the field of energy for industry, a considerable step change compared to lead-acid batteries”, said Marco Righi on that occasion. This innovation still has to make inroads in the earth-moving field, where the first electric machines (mini excavators and skid steer loaders) have been cropping up only recently, but which is still lagging far behind in technology compared to the lifting & logistics and heavy transport fields.

This yawning gap is a result of a completely different mindset: in the earth-moving field, internal combustion engines are still the only solution available for heavy machinery, forcing OEMs to greatly diversify their light- and heavy-duty product ranges. Moreover, the work cycles of an earth-moving machine are definitely different and more demanding than those of a conventional aerial platform, even though it is self-propelled.

All this has kept the OEMs of the electrification sector away but, as we all know, the future won’t wait and today the technology is sufficiently ripe for the leap in this sector too. This “ripeness” comes from years of data analysis and studies and from the development of artificial intelligence algorithms, as Righi explained during the conference at the GIS (Italian Lifting and Heavy Transport Show). His company has made use of information drawn from the over 18 million cycles of its own batteries installed in every corner of the globe and these data have made it possible to leverage machine learning both for the useful life of the battery and for predictive maintenance.

All of this happens under the big hat of the Flash Data Center, which remotely checks and verifies the operation parameters of every connected battery daily, analysing their performance, processing statistics and developing an algorithm that can predict faults and create preventive maintenance alerts. This, together with continuous R&D focused on life-cycle increase, energy density improvement and the development of AI systems fully dedicated to predictive diagnosis, is paving the way towards a future that will see lithium batteries taking the place of lead-acid batteries.

With this technology within reach, lithium batteries have definitely established themselves as essential elements for the future Industry 4.0, the fourth industrial revolution consisting of completely interconnected machines that interact with each other and carry out self-diagnostics and preventive maintenance.