Compact dimensions, excellent range, and autonomy! Esagono Energia vehicles are perfect for numerous uses with a view towards environmental sustainability

The segment broadcasted on LA7 channel didn’t say so, but the little electric bus shown zipping through the streets of Ljubljana, a city that has become a symbol of sustainability, is 100% Made in Italy. It’s produced by Esagono Energia, a small company (only 15 employees) based in Pozzuolo Martesana, in the province of Milan.

The 10 electric minibuses currently in circulation in Ljubljana are the 8-seat Grifo model. But on the same platform, with type approval in class N1 (light truck), Esagono Energia also produces the 6-seat Geco version and the two Gastone pick-ups, with short and long wheelbases. These last two are suitable for a wide range of setups, thanks in part to their flatbed solutions. 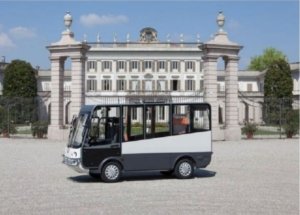 Each version is based on an aluminium chassis (nowadays welded, but soon to be reworked with aerospace technology). They are approved for a weight capacity in road-going condition of 2,000 kg and for a payload, in various versions and setups, ranging from 850 to 1,250 kg. Their reduced dimensions (3.890 metres long and 1.2 metres wide) are designed for mobility in urban centres.

Martesana’s small factory produces approximately 200 of them per year, selling them all over the world to private clients and municipalised entities in Europe’s biggest cities.

All designed in-house, all created with Italian suppliers. This has been founder Stefano Carmeli’s choice since 2011, when he decided to pivot Esagono Energia towards electric vehicles for urban transportation. The company already had 35 years of experience in the design and development of automation and management systems for energy, telecommunications and solar power.

For the first models produced starting in 2013, the designers opted for AGM-type lead accumulators: 400 kg of battery for less than 100 km of urban travel. But today, more than 80% of the vehicles use batteries based on lithium technology. They are supplied by Reggio Emilia company Flash Battery, which has developed a custom-made family of LiFePo4 battery packs with BBS management. With more charge and discharge cycles, reduced maintenance, the possibility of recovering energy during braking and descent, and faster recharging. They range from a minimum capacity of 13.5 kWh and a weight of just 150 kg, which ensures 70 km of urban driving, to one with a capacity of 40 kWh and up to 180 km of driving.

In the words of Esagono Energia’s technical director Massimo Tabacco:

“Flash Battery’s remote control technology allows us to optimise maintenance and assistance for vehicles scattered all across the world. We have clients who, despite intensive use, have already reached total distances travelled of over 100,000 km.”

Riding the wave of this new “green” sensibility, Esagono Energia aims to saturate its production capacity of 500 vehicles per year, developing new projects. One might involve a new vehicle with a load carrying capacity of up to two tons. Another is the school bus version of Grifo and Geco.

A revolution in cold chain logistics

But the most interesting news has to do with last-mile urban logistics, with a special setup for the transportation of perishable refrigerated goods. It is an N1 isothermal truck, born of a collaboration with the French company ColdWay (of the Sofigram group), who have patented a stand-alone, compressor-free refrigeration system. Cold is instantly produced, with no need for external energy, by way of a chemical reaction between ammonia and salts contained in a reactor and an evaporator. The reactive substances are sealed in a closed circuit. It functions in two phases: first, the generation of cold and/or heat (Phase 1) and second, the regeneration and conservation of energy (Phase 2). The first vehicle was presented at the MOVE 2020 Exhibition in London in February of this year.

A thought on autonomous driving

On the same topic of urban logistics, Esagono Energia has also begun a collaboration with various universities in Lombardy, aimed towards a driverless, autonomous vehicle.