Flash Battery electrifies the cleaning and sanitisation of large areas

Inside the latest Dulevo innovation beats the red heart of Kaitek Flash Battery, the lithium ion battery with outstanding efficiency

Dulevo continues to choose Kaitek Flash Battery, and it does so for a machine that is a triumph of innovation, presented at Ecomondo 2019: 100% electric D.zero² Hydro.

The D.zero² Hydro is, after the D.zero², the first fully electric street washer.
Calling it just a street washer doesn’t do it justice, however, because its features mean it is ideal for all those places in which high levels of hygiene and sanitisation are required: not just urban areas but also industrial areas, resorts, major sporting complexes and so on.

The credit for its outstanding performance and great versatility can also undoubtedly be attributed to the innovative technology of the Flash Battery lithium batteries, whose compact size and weight give greater power and efficiency. 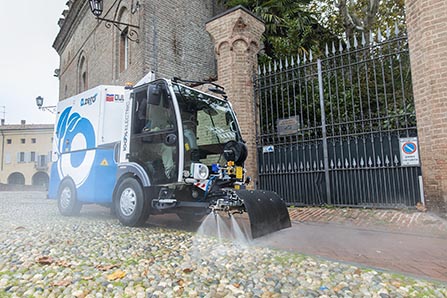 Environmental benefits of the electric power of D.zero² Hydro

The main benefits of a 100% electric machine are without a doubt the elimination of harmful emissions in the atmosphere, as well as of noise emissions.
These characteristics, a direct result of the lithium technology used, make the machines particularly appealing to public administrations which, as Dulevo Brand & Communication Manager Massimiliano Borra confirms, “are increasingly concerned with environmental issues and reducing the impact of activity on the land and on the people. The D.zero² Hydro is perfect for meeting the needs of cities and municipalities that want to invest in their citizens’ quality of life. The topic of electrification is increasingly widespread and investments are becoming more and more substantial. It’s great to see that those looking after their citizens are increasingly concerned with environmental issues, which go hand in hand with people’s health”.

The two companies have been working together since 2016, with the aim of creating the first 100% electric street sweeper also capable of matching the performance of endothermic sweepers.

Dulevo chose Kaitek as its partner in this project for a number of specific qualities:

Spotlight on the heart of the D.zero² Hydro: the Flash Battery

Flash Battery is generally known for its outstanding autonomy, which in machines means the practical possibility of completing an entire work shift without the need to charge. This aspect brings other positive implications: a washing performance that matches endothermic machines, extremely low maintenance and power costs… all of which add up to an extremely satisfied operator.

More specifically, the D.zero² Hydro is installed with a Flash Battery 96V 600Ah.

3G Monitoring: engineering that facilitates use

Remote control, the jewel in Kaitek’s crown with its famous Flash Data Center, is fundamental. Continuous performance monitoring of the machine installed with the Flash Battery is made possible via remote control through a 3G system: first-rate engineering which allows for ease of action.

The installed Flash Battery is charged with a CCS COMBO 2 connection, the European standard in the automotive world. It allows for both fast direct current charging via an external charger, and slower alternating current charging using the on-board charger. Thanks to this battery charging system, the machine can be used in most countries in the world.

The mechanics of the Flash Battery were tailored to the D.zero² Hydro to meet the specific needs of its use, such as:

The power generated by the Flash Battery is used for both traction and cleaning.

The battery powers a service circuit (electro-hydraulic) from which a pump provides power for the power steering, as well as moving the spray bar and lifting the tank.
The battery directly powers the electric motor, the high-pressure system and all the services (such as air conditioning).

Technical details of the D.zero² Hydro:

The perfect technology for these times

ELECTRIFICATION
At this time, however, apart from sanitisation, there is another issue to be more aware of: the need to embrace systems such as electric power which make it possible to reduce harmful emissions. “We strongly believe that electric vehicles are the future”, says Dulevo. “Harmful emissions limits are often breached, especially in big cities. The global lockdown that we have experienced has shown us how a break from emissions can quickly bring about an improvement in the quality of the air. This is why today we are even more aware of the need to choose more sustainable vehicles for our cities!
It was 2017 when we saw the D.zero² sweeping Piazza Duomo in Milan, and it was a great satisfaction for us who have always believed and invested in “Made in Italy”, delivering our machines to the most important municipal companies in Europe. For us, being in this sector means believing in the environment and in our country: it is great to work with partners like Kaitek Flash Battery who share our values and help us carry them into the world”.