The agricultural electrification revolution, in the name of cutting-edge lithium technology

A plural discussion tracing out the diverse and revolutionary components of a virtuous relationship between technological partners. A relationship that is centred around the new era of sustainable machines, riding on the back of lithium battery technology and the ever more advanced dynamics of industrial protagonists who have raised research and development to unprecedented levels. These important elements were extrapolated by Sollevare from an exclusive interview with Elisabetta Orlandi and Matteo Donelli, respectively the Export and Sales Managers of Flash Battery. The focus of this detailed discussion was the specific development of Flash Battery powerpacks for the agricultural machine sector, and in particular telescopic lifters, where this technological developer in Emilia Romagna as achieved one of their most outstanding successes in collaboration with the state-of-art manufacturers, Faresin. Today the 6.26 Full Electric Lifter represents the cutting edge of the electric transition in the new mechanised evolution of agriculture. This success was signalled on the international market with a large number of sales in Great Britain and other advanced countries, and it provides a good starting point for an overall analysis of this phenomenon and the new possibilities for lithium batteries. 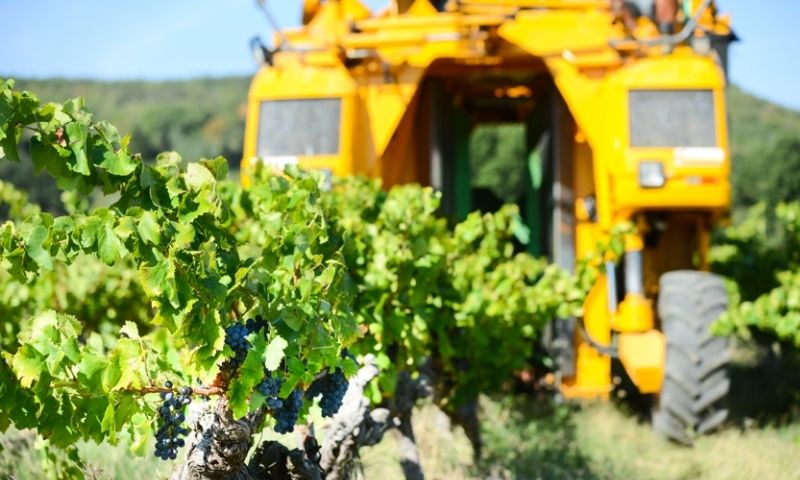 As an introduction, I think it is worth outlining the current market context for the evolution of Flash Battery’s products.

(Matteo Donelli) – Flash Battery is both directly and indirectly present across Europe through prestigious partnerships established with very experienced powertrain system integrators active in the major markets. These include Atech in Germany, Efa France, and Q-tronic in Benelux. Along with Italy these three markets are fundamental for the progress of electrical transition in the agricultural world, together representing more than 80% of the European market for electrification of industrial machines and electric vehicles, especially in the building and agricultural sectors, in which Fla­sh Battery has years of experience.

Our commercial approach has necessarily changed, also in response to the pandemic that has conditioned the last couple of years. Until recently electrical and hybrid applications based on lithium technology were considered by many OEMs and small to medium-sized manufacturers as little more than technological showpieces for trade fairs, but today the manufacturing process is undergoing an acceleration in all respects. A growing number of manufacturers have started to make concrete plans for their own genuine mini series of machines and vehicles for conversion to our lithium technology. Over the last 20 months these projects have multiplied and many manufacturers now offer lines of full electric models with lithium battery packs alongside their traditional thermal powered machine series.

Effectively, this is a gradual but inescapable revolution.

(Matteo Donelli) There are other motivations that propelled us in this direction and in particular the new green objectives promoted by the European Union for cutting of atmospheric pollution emissions by 55% within 2030 and achieving the goal of climate neutrality within 2050. Along with the research and development imperatives linked to the initiation of Industry 4.0 programs, the manufacturers of industrial machines and vehicles in Fla­sh Battery’s reference markets have finally set off down the road of environmental and technological sustainability in a more decisive manner. Ever more hybrid and full electric applications are being released onto the market with the aim of anticipating the introduction of green regulations, which by now have become inevitable and will become increasingly strict in the near future. Flash Battery’s existing experience in the electrification sector meant that they were immediately ready to guide manufacturers through this inexorable transition. Many of them have completely redesigned their machines in relation, for example, to changes in barycentre (due to the different weights of installed lithium powerpacks), the tracking of wiring in relation to heat dissipation, and other basic issues. Flash Battery natu­rally worked in tandem with their various technological partners, conferring for example with component maker categories like axle manufacturers in order develop comprehensive solutions that integrate this stage of development and revision of the world of agricultural and industrial machinery. Customers who trust themselves to Flash Battery technology and their partners, power train system integrators of international standing, benefit from continuous support from the prototyping stage all the way to serial production, realizing comprehensive turnkey electrification projects.

What machines are we talking about specifically?

(Elisabetta Orlandi) These are very particular production categories, like the straddle tractors that are widely used in France. Considerable progress has been achieved with them along the path to electrification, adopting Flash Battery’s lithium technology to satisfy strict environmental limits in sensitive and prestigious agricultural areas like Champagne, Bourgogne, and Bordeaux. Other machine categories involved in the same process of change include wine making, green area maintenance, and the feed mixers used in farms around the world. All these categories are inspired by the idea of safeguarding farm animals and maintaining a fully protected production cycle that respects the surrounding environment.

Logistics, Construction, Ground Support Equipment, basically a whole world electrifying itself with a huge demand for clean energy. As protagonists in the most advanced technology, lithium batteries, how do you see this trend developing?

(Matteo Donelli) In general, in the parts of Europe striving towards environmental sustainability, the percentage of mechanised units converted to full electric technology today is around 5 to 10% and certainly increasing rapidly, also in response to the shift towards connectivity, automation, and digitalization of machines and processes that has always been promoted in the industrial policies of the European Union.

As in every transition, along with the necessary affliction that drives the change, the first advantages are also emerging. What are the most obvious ones?

(Matteo Donelli) The advantages of lithium compared to lead batteries are obvious. An option that perfectly exploits our lithium based technology in the agricultural and building machine sectors is, for example, machine hire. Firstly, unlike traditional lead based technology, lithium does not require the assignment of specific areas for vehicle recharging. Secondly, the life cycles of lithium batteries are much longer than lead, with significantly improved returns on investment in terms of hire vehicle lifespan, giving an average use ranging from six to around eight years. In our experience with AGV and LGV industrial modules deriving from our close partnership with pioneers in the sector like Elettric80, we have achieved extraordinary results in the dynamics of opportunity charging (partial recharging) for optimum use of machines in their assigned applications. We brought this experience to the agricultural and building worlds, studying together with the manufacturers the best ways of extending machine operation even beyond conventional work schedules.

Even in Europe there were markets that immediately proved more receptive than others.

(Elisabetta Orlandi) In the main countries for our business, cited earlier by Matteo Donelli, and especially in the Low Countries and across Benelux, there is great interest in the development of lithium, above all for agricultural machines and urban mobility. Germany is one of the most important world manufacturers of special machines for agriculture as regards reducing emission of pollutants in the work environment (in fields, greenhouses, and among livestock, to protect the health of workers and farm animals). In France there is a similar dedication to sustainability for the machines used in viticulture, with a demand for special, made-to-measure lithium powerpacks and batteries (as already mentioned, for straddle tractors, which require installation of dispersed battery packs to balance the overall weight distribution of the machine). This advanced market context means that our dealers are effectively real technical partners in comprehensive electrification solutions. They establish the initial contacts for projects dedicated to our various machine manufacturing customers, with Flash Battery handling the preliminary design and sizing of battery packs, out technical partners dealing with supply and adaptation of inverters and motors, and the final customers carrying out the basic installation.

Along with straddle tractors, another category in which our lithium powerpacks are highly appreciated (due to the advantages derived from the lithium-iron-phosphate [LiFePO4] technology adopted by Flash Battery, that offers high stability, safety, and excellent electrochemical performance) is for the feed mixers mentioned earlier. Our strong point is radical customization: these are often very energy intensive applications that require abundant energy and power. They are based on high voltage systems, in the order of 600 V, when Flash Battery’s specific know-how becomes essential. Feed mixers require advanced mechanical engineering solutions because often the battery packs have to be distributed throughout the machine in very unusual ways, exploiting the limited spaces available. These batteries have to power as many as five motors and since they operate inside farms, the chemical safety of the LFP becomes an important factor for the health of operators and farm animals alike.

Finally, we come to the great success with telescopic lifters for agriculture. A success achieved by the longsighted manufacturer, Fare­sin, who involved Flash Battery in a decisive manner.

(Elisabetta Orlandi) Faresin’s development of a specific project for compact telescopic lifters was already underway in preliminary form in 2019. It involved a very particular planning model that involved not just the customers but also the motor and inverter suppliers in a synergy that led to the creation of a specific powerpack for the typical handling and lifting operations of telehandlers, taking into account the needs of manufacturers and final customers who understandably wanted extended operating autonomy for this machine category. To provide more flexibility for final customers who wanted improved autonomy, Flash Battery developed two solutions within a single mechanical design, with the option of choosing between two energy packs, one of 24 kWh and one of 32 kWh. The choice of each individual component used in the battery pack was based exclusively on applicational requirements and the machine for which the powerpack design was developed, which meant considering cable diameters, fuse capacities, DC/DC converters with PDU (ed., Power Distribution Unit) functions to supply all the supplementary lifter services.

(Matteo Donelli) This highly stimulating and satisfying project opened the way to high-vol­tage applications (from 400 to 600 V) for higher capacity telescopic lifter models. Another interesting aspect of the project developed for Faresin regards the implementation of an ad hoc remote monitoring and diagnostics system for the battery pack, an extremely useful function for all those manufacturers that export their machines on a global scale. This vital utility allows us to conduct check-testing during the first year of use of the electrical lifter (before full scale series production), while enabling final customers to remotely check the condition of their batteries scattered around the world at any time, while also enabling the possibility of predictive maintenance for each installed battery to avoid all potential problems. The Flash Data Center, proprietary software implemented by the R&D section of Flash Battery, can collect all the powerpack data and identify any parameters that deviate from the foreseen standards. In this way, the future large scale spread of lithium batteries takes on the guise of an informed scientific evolution with advantages for global operators and the pending investment and transition processes for production machinery fleets.