To understand why the lithium battery market and their applications are currently booming, you need to understand their technology, because how they work makes them unique. Attracted by the performance of lithium, which is decidedly better than lead-acid, an increasing number of industrial machine and electric vehicle manufacturers are choosing next-gen accumulators.

Tesla, for example, was one of the first ones to create a clear gap between itself and other vehicle manufacturers by creating the first true electric saloon in history. In the case of Tesla, its motors are powered by lithium battery packs which offer a range of about 500 km and acceleration from 0 to 100 km/h in just 2.7 seconds.

Lithium is the lightest known metal in the world and, at the same time, the least dense solid element with the highest electrochemical potential. As far as we know at the moment, it’s the best element for the batteries of today and tomorrow.

To improve the performance and duration of accumulators was the goal which drove Marco Righi and Alan Pastorelli, then in their early twenties back in 2009, to perform their first tests on lithium batteries.

These tests were more than encouraging and led to the creation of Flash Battery in 2012: the leading European company in the production of lithium batteries for industrial machines and vehicles. 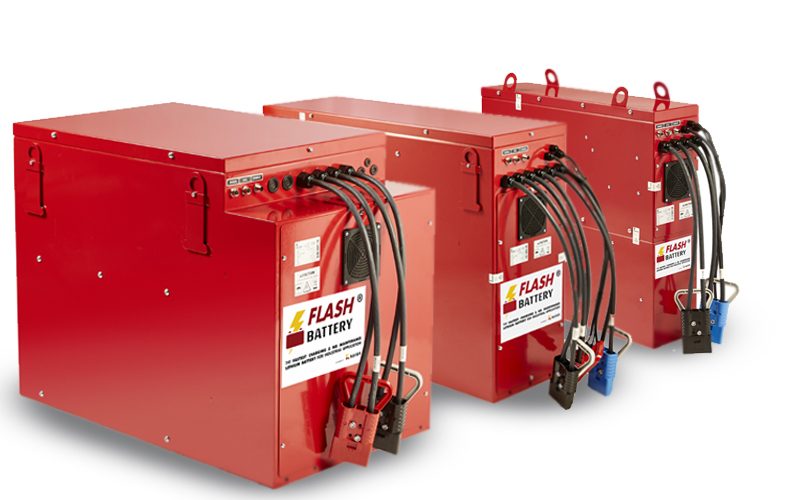 EVERYTHING STARTED WITH ELECTRONICS

First and foremost, these two young men were motivated by their passion for electronics.

It had to be his only son to take over the reins of the family firm one day and, sure enough, it was at his father’s company that Marco Righi began to take his first steps towards a successful career in electronics. His path towards a fulfilling career already seemed mapped out, safe and straightforward, but fate hit him with what initially seemed like a cheap shot.

Righi saw his dream shattered of running the company where it all began and he was forced to take another professional path. But he never entirely gave up his passion for electronics. 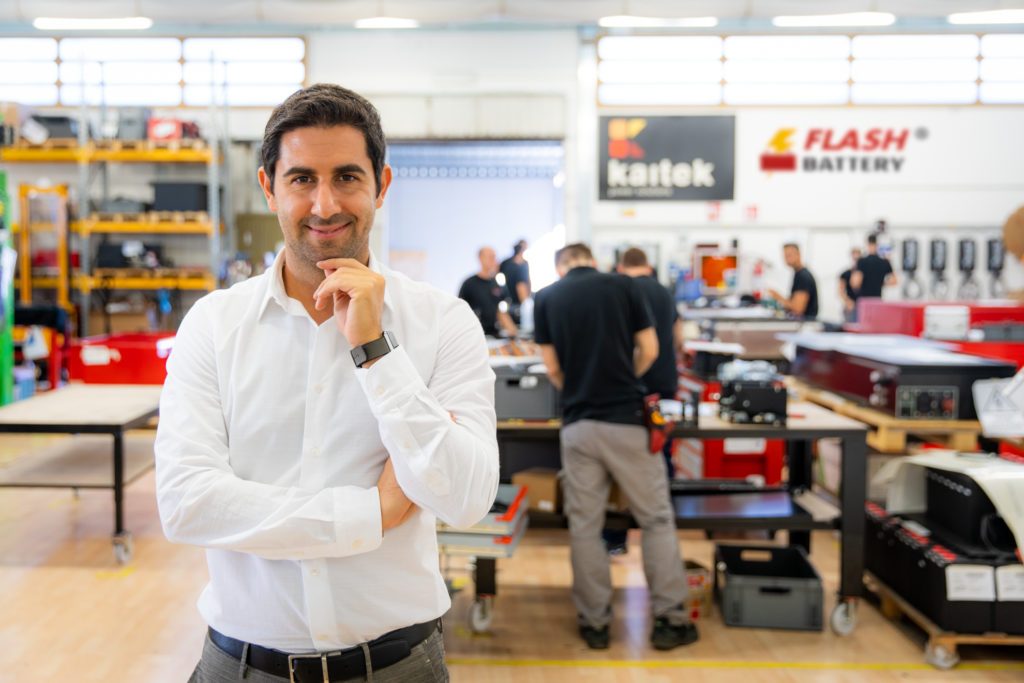 On paper, these new lithium cells showed astonishing features: they weighed three times less than the lead-acid batteries used up to that point, while lasting three times longer.

However, those lithium accumulators did not provide the desired results.

They did not look great, not to mention that the cells were inconsistent and the internal electronics were inadequate.

This gave Marco Righi an idea: to study the technical problems of this battery and to solve them by designing a new management and control system.

“At that point, I brought in my friend from our days of garage experiments, Alan Pastorelli (who in the meantime had graduated with a degree in electronic engineering and was working in the automotive industry), and we wasted no time. We began working on the design of our lithium battery management system every evening and every weekend”, Marco Righi recalls.

That was in 2012, and it was then that we officially began distribution of our Flash Battery lithium batteries. Marco RighiMarco Righi

In November of the same year, the company took its first big step and in partnership with Vantage Power Global, an Asian company operating in the automotive sector, it broke the world distance record in the field of sustainable mobility for an all-electric vehicle: 800 km in a single charge. 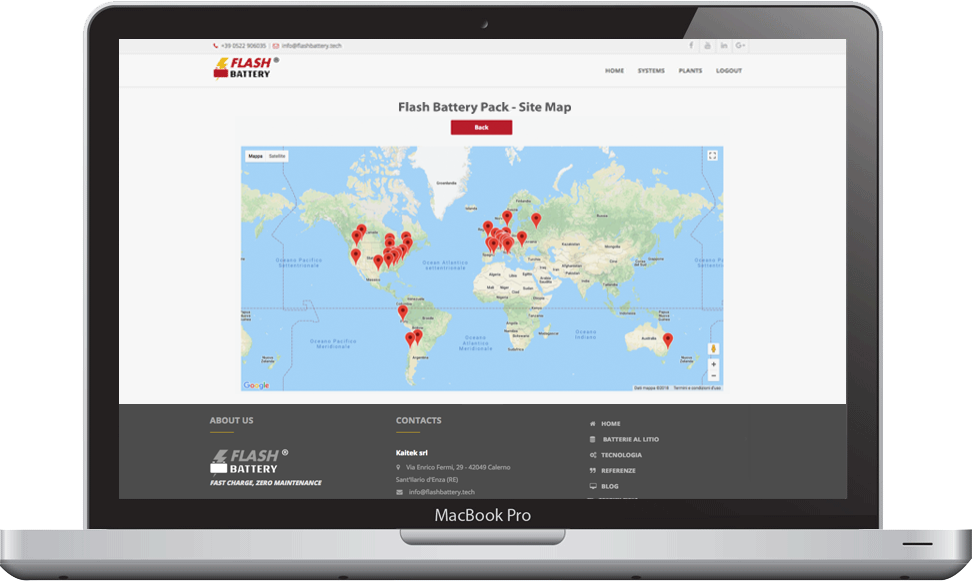 In 2014, Flash Battery became the lithium battery supplier for a company that would soon become one of its main customers in the industrial machinery sector: Elettric80.

With a turnover of around €300 million and 11 worldwide subsidiaries, Elettric80 specialises in the creation of integrated, automated solutions for the tissue, food and beverage sectors, such as robotic palletisation systems and automatic laser guided vehicles (LGVs).

For a multinational of this standing, it is very important to have the possibility of monitoring and checking the status of lithium batteries sent to all corners of the world and this is exactly what the remote control system designed by Flash Battery allows.

The advantages of Flash Battery’s integrated innovation are obvious: remote monitoring of each individual lithium battery, and analysing all data received, allows faults to be prevented and makes it possible to organise any special maintenance operations in a timely manner, if necessary.

If a conventional lithium battery has a fault, it usually takes several days of machine downtime to get it back working properly. In fact, the service department is notified when the machine stops working and it is only after the report has been sent that arrangements can be made to fix the battery pack, following an inspection to analyse the problem and the replacement of the necessary parts, which might be relatively quick if they are available.

Conventional lithium batteries don’t tell you in advance if and when they will stop working and it goes without saying that any interruption to production for the time required to actually get it back working may cost a lot of money.

However, with Flash Battery’s remote control, we can monitor the operation of the battery in real time and solve 93% of faults before they even happen. In fact, an automatic alert system notifies the Flash Battery service department of any critical issues with the lithium battery and this means we can take action and solve the problem before any machine downtime occurs.

In 2015, Elettric80 joined Flash Battery’s board, allowing us to perfect two important features of our new lithium battery: fast charging and the Flash Data Center. In particular, the first feature reduces charging times and ensures the system is more efficient; while the second one helps monitor and analyse the status of each individual battery installed on a daily basis. It is also a zero-maintenance lithium accumulator, which minimises expenses and management costs.

Flash Battery lithium batteries are used in all Elettric80 laser guided vehicles.
We currently perform remote monitoring of 2.844 LGVs located in 42 countries around the world (09/04/2021).

In 2018, Tesla chose Flash Battery and its remote battery monitoring for the Tesla Destination Tour.

This was the first fully electric tour, which saw the most famous electric supercar in the world, the Tesla, used over 12 stages across Italy. In fact, the power for the trailer coupled to this prestigious Californian car, which powers a mobile kitchen, was provided by a 10.2 kWh Flash Battery lithium battery. We talk about it in this article.

“Right from the very first experiments in my garage”, notes Marco Righi, CEO of Flash Battery, a manufacturer and supplier of lithium batteries in Italy, “we believed that lithium batteries had the potential to replace traditional batteries and thus improve the performance of industrial machines and vehicles. Thanks to our special active and passive electronic balancing system combined with remote monitoring, we have made this change of technology easy and painless”.

THE EXTENSION OF OUR REMOTE CONTROLLED BATTERY NETWORK

Since Flash Battery was founded in 2012, we have made over  15.000 lithium batteries and customised solutions have been developed for over 500 different models.

We have installed 200MWh across various industrial machinery and electric vehicle applications, and all Flash Battery products, used in 54 different countries around the world, are automatically monitored on a daily basis by our proprietary remote control system, the Flash Data Center.

93% of faults were dealt with in advance and proactively in order to reduce unnecessary, inefficient machine downtime. For 2022 Flash Battery is forecast to produce 20.000 batteries, installing over 200 MWh in various industrial machinery and electric vehicle applications worldwide. 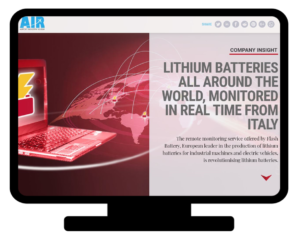