ON SITE | KAITEK FLASH BATTERY IN “CHARGE” OF INNOVATION

The company from Emilia-Romagna has a great talent for interpreting the specific needs of its customers and then finding the most effective solution. This vocation led to the creation of Flash Battery, a one-of-a-kind lithium battery for industrial machinery and electric vehicles.

It won’t be long before Kaitek Flash Battery moves to its new premises, after construction started last September with the symbolic laying of the first stone. The significance of this relocation is as great as the geographical distance is short: the current Calerno headquarters and the new premises at Sant’Ilario d’Enza, both in the province of Reggio Emilia, are just 3 km away from one other. But moving to premises five times bigger than before – 5,000 m2 on a 20,000 m2 site, with the possibility of further expanding to a total of 10,000 m2 covered premises – shows the company is determined to keep up with its fast pace of growth. 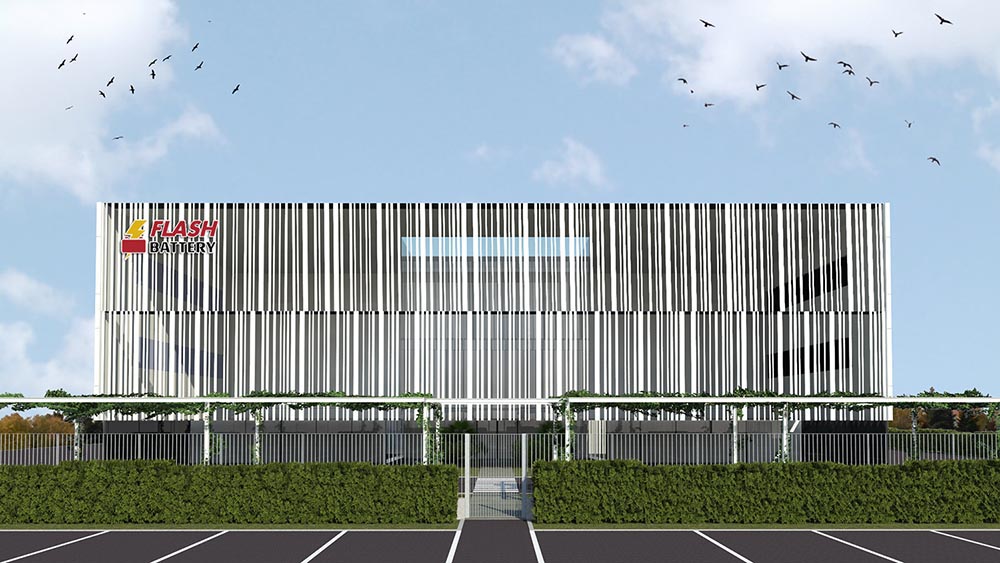 Rendering of Kaitek Flash Battery’s new premises at Sant’Ilario d’Enza (Reggio Emilia), which will be operative from june 2020. The new site will be five times bigger than its current premises at Calerno. it will be home to all its industrial and production activities, its research & development team, the innovation and marketing departments as well as its sales and administration offices. The new building is the result of investments worth € 6 million and its design was based on eco-sustainable criteria: no use of fossil fuels, as most of its energy needs will be met by its own photovoltaic power generation plant.

Initially, the core business of the company, based in Emilia-Romagna and officially founded in 2012, was the production of BMS (electronic management systems for lithium batteries). Flash Battery adapted to the needs of its customers and gradually started to offer “turnkey” solutions, namely complete battery packs ready to fit on heavy machinery. It was a winning strategy and led to an impressive surge in turnover: from € 700,000 in 2014 to € 2 million in 2015, all the way up to € 4 million in 2016, € 6 million in 2017 and € 13 million in 2018.

Last year was a period of physiological adjustment for Kaitek Flash Battery, but the company still ended the year with an impressive turnover of € 14 million. The decision to build its new premises is linked to the need to expand in terms of its workforce too, currently standing at 52 people with an average age of 35 years.

Founders Marco Righi and Alan Pastorelli are also young and currently hold the offices of CEO and CTO (Chief Technical Officer) respectively. Their business venture started off in a garage, just like the fascinating biographies of several famous businesspeople across the Atlantic. Mr. Righi was born in 1985, the same year his father set up his own business manufacturing high-frequency battery chargers, an extremely innovative technology at the time. After expanding and becoming a leader at European level, the family company was sold in 2006.

This was when Marco, who was working in the Research & Development office and hoped to take over from his father one day, decided to take a different path. And this turned out to be a decidedly fortunate decision.

Our secret to success

The secret behind our success was a brilliant idea linked to lithium batteries: they first appeared on the market in 2008/2009, but there were still some significant critical issues in terms of their reliability and safety. “There were some vehicles that even set on fire”, Mr. Righi recalls. There again, this type of cell offered several distinctly superior features compared to traditional lead batteries: they weighed three times less, their life cycle was four times longer, they had a high energy density and faster charging time for continuous use. So, an essential tool for getting the electric market on its feet, but first, the priority was to make it safe. Marco Righi and Alan Pastorelli were confident the solution to the problem would come by improving the management electronics, and they were right.

After conducting numerous experiments in their garage, using an old electric Citroën as their “guinea pig”, the two young entrepreneurs developed a revolutionary system compared to what was already on the market, with the ability to manage the batteries better and with more power. A patent application was recently filed for this system. A few years later (in 2012), Mr. Righi and Mr. Pastorelli founded Kaitek Flash Battery, paving the way for their continuing success. Behind their constant expansion was – and still is – their superior technological quality, that makes them stand out from the rest of the market, for example, applied to the remote battery control and management system called the Flash Data Center. The batteries can all be interconnected, with data uploaded daily onto the cloud and automatically analysed: an email alert is sent to the service if any critical issues emerge, so maintenance can be carried out even before the customer becomes aware of any issue. A particularly important function for medium-large batteries like those made by the Emilia-Romagna-based company, where any downtime can result in very costly “delays”.

Kaitek Flash Battery has worked closely with Elettric80 since 2013. This is another leading company based in Reggio Emilia specialising in the production of automated logistic solutions for manufacturers of consumer goods in various sectors. As well as fitting its vehicles with batteries supplied by Kaitek Flash Battery, the working relationship progressed to a partnership at corporate level in 2015, paving the way for further developments. Working together, the two companies have already reached two important goals: inductive charging offering the guarantee of enhanced system safety whilst the Flash Data Center is a tool enabling the execution of predictive maintenance, with significant benefits for end users.

Flash Battery lithium batteries are already used in numerous applications today: from electric cars to nautical batteries, technology for Laser Guided Vehicle (LGVs) and Automatic Guided Vehicle (AGVs), and are expected to play a major role in the construction industry in the near future. The Energya is the first hybrid concrete mixer launched by CIFA and a tangible example of the successful interaction already ongoing in this field. Available as the E8 and E9 models, the vehicles in this series flank traditional fuel systems with electric power provided by Flash Battery’s lithium-ion batteries.

There are different ways to charge “plug-in hybrid” concrete mixers: the “high-speed plug” is for charging at a specially designed charging station achieving 50% charge in 25 minutes; the standard version uses a normal industrial power socket, but takes about four hours. Technology continues to make progress. As well as relocating to its new premises in June, (although the official inauguration has been postponed until spring 2021 for obvious reasons), the company will also launch the series production of a new generation of batteries designed to maintain current safety standards but with a reduced weight and footprint. This will undoubtedly continue to drive the transition to electric power, which is now a necessary step that industry must take.

We experienced rapid growth that was definitely helped by the fact we had extensive industrial experience behind us, despite being so young: this helped us develop our products with an awareness far beyond what a university start up would have, for example.

Another factor is linked to the quality of our battery-balancing technology, still unrivalled among our competitors today. A third key factor was keeping a clear focus on our benchmark market: whilst our competitors produce all types of battery, from those for bicycles to those for industrial machinery, our target has always been industry, industrial vehicles and special industrial machinery, consequently producing medium-large batteries.

Since 2012, we have had top players in the aerial platforms market as our customers, from Platform Basket to Easy Lift; more recently, new leading companies in the lifting and platforms sectors have joined us. Altogether, the MEWP segment is worth around 15% of our turnover – a significant and growing figure: more and more customers are saying goodbye to internal combustion engines and opting for full-electric or hybrid systems. The AGV/LGV sector is currently our core business, worth about 40% of our total turnover, followed by industrial electric vehicles, vehicles for waste collection and deliveries in old town centres, as well as several other, very diverse applications. We are seeing more and more interest coming from the world of construction in general and from other areas like agriculture, which we initially thought would not go down this road, but are actually much closer to electrification than you might think.

TOWARDS THE FUTURE WITH EUROPEAN TOP PLAYERS

Kaitek Flash Battery is one of 17 European companies involved in IPCEI (Important Projects of Common European Interest), promoted by the European Commission for the development of new-generation lithium batteries. If the know-how brought by the leading companies from the various countries involved (Belgium, Finland, France, Germany, Poland and Sweden, as well as Italy) is vital, the role of the public sector is also essential:

In current conditions, the market alone would not be sufficient for us to implement significant innovations in this field”, explains Marco Righi. “IPCEI has given us the chance to start investing with our Research & Development team, with a different approach: normally you would focus on the immediate future, but in this context we are able to work on projects with a much longer time frame in mind. More specifically, we are investing in research with a focus on electronic control systems for next-generation lithium cells, as well as on Artificial Intelligence. Its development will enable us to use the data uploaded onto our Cloud in ways that will be increasingly useful for the customer, namely by extending the life of batteries, that can alter their parameters depending on the customer’s intended use and their expected lifetime. These systems hold great promise for the future.