Planning, testing, measuring and setting new standards for improvement: this is the case of Flash Battery, a leading manufacturer of lithium batteries for industrial machines and electric vehicles.

Let’s start with the data, then look at the example of Flash Battery: today, Emilia-Romagna’s exports are now almost seven percentage points above where they were in 2019, the year that set the previous regional record. In the first quarter alone, as pointed out by ISTAT a few days ago, exports reached 35.36 billion, two billion more than 2019’s numbers. The best results were recorded in Asia (+40.7%), Oceania (+37) and Central and South America (+32).

Now let’s look at one particular success story. Flash Battery, headquartered in Sant’Ilario d’Enza in the province of Reggio Emilia, was founded in a garage in 2012 by two friends, economist Marco Righi and engineer Alan Pastorelli. Today, Righi is CEO (as well as president of the Young Entrepreneurs of Reggio Emilia and vice-president of the provincial Industrial Union) and Pastorelli is CTO.
Specializing in the production of lithium batteries for industrial machinery and electric vehicles, Flash Battery recently inaugurated its new headquarters in the presence of the President of the Region of Emilia-Romagna, Stefano Bonaccini. The new plant covers 20,000 square meters (with a production area of 3,200 square meters) and has 65 employees whose average age is under 35. Year-end turnover for 2021 is projected to be 17.5 million euros, representing a growth of 30% compared to 2020. 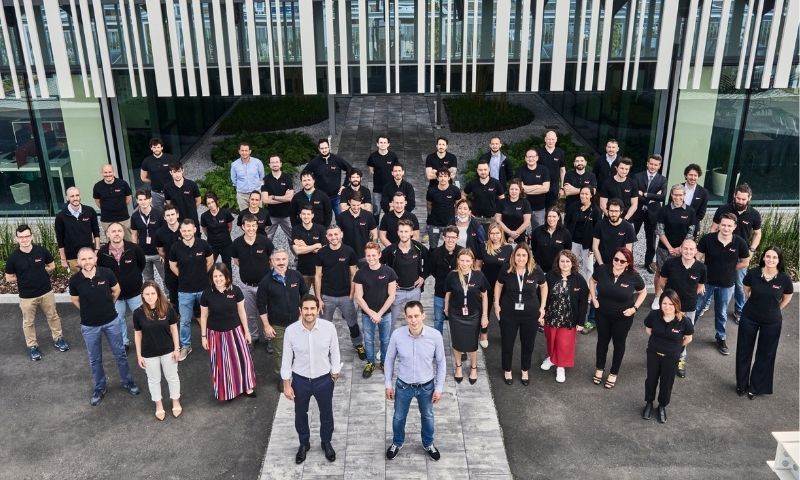 On the subject of exports from Emilia-Romagna, there is one fact we cannot overlook: Flash Battery exports to 54 countries and is a partner of key players in the industrial, research, and university sectors for some of the most cutting-edge projects launched by the European Union (with total investments of over a billion euros) aimed at reducing the continent’s carbon emissions to zero by 2050. As for partnerships, they include giants of the industry like EFA France and German company ATECH GMBH working for the development of electrification projects in Europe. Flash Battery’s exports have grown over the years and today represent 30% of the company’s turnover.

There is a method behind these numbers, one based on the principle of “continuous improvement”. It is no accident that in Sant’Ilario d’Enza, on a blackboard in the battery testing area, these three words are written: Goals, People, and Kaizen. The last refers to a method developed at Toyota by mechanical engineer Taiichi Ohno. It is a Japanese word that can be translated as “changing for the better”.
Masaaki Imai, founder of the Kaizen Institute, sums up the three pillars of the philosophy: first of all, an organization’s results can be improved by acting on the behaviour of individuals; secondly, people want to do quality work, and must be empowered to do so in an environment free of barriers and organizational rigidity; finally, standards should not be presented as strict rules, but as tools for understanding, entrusted to people so they can internalise them and make them their own.

The Toyota example: employees as key players of progress

“In the Toyota system,” emphasises Alberto Portioli, professor of Operations Management at MIP Polytechnic business school in Milan, “workers are allowed to modify procedures to improve them. In fact, they are encouraged to do so. Having the ability to change those processes takes away the feeling of just being there to follow instructions, because now if there’s a better way to do something, that’s how they can do it. If they can’t find a better way, or until they do, that means that the existing process is the best there is, and the workers make it their own in order to do their jobs well”.
If Henry Ford’s system was successful at the beginning of last century by separating the people who decide what to do from the people who do it, “the Toyota system”, explains Portioli, “reintegrates both the roles of decider and doer into the worker, as it is done in artisan production, and this leads to an increased pride in their work”.

“The role of all Flash Battery employees”, says Righi, “is not only to perform tasks, but also to improve them, fulfilling themselves professionally and personally, and at the same time helping improve the company”. This is Emilia’s own continuous self-improvement, with employees as the stars of the show. Plan, do, check, and act: this is the famous “cycle” developed by American engineer William Edwards Deming, a promoter of studies on the improvement of management.
To make progress, companies must go through cycles of “problem solving,” structured into four phases: “plan” operations and actions aimed at improvement; “do” experiments; “check” the results; and finally, “act” to define and communicate new standards. That is how Flash Battery has grown: by planning, experimenting, measuring and defining new standards, carving out a leading role in the lithium battery market. All by leveraging the skills, heart, and brains of the company’s (very young, as the average age shows) workers.