The insight of two young friends who dreamed of developing a type of high-efficiency lithium battery for industrial vehicles, in Sant’Ilario d’Enza (RE). “Flash Battery” today is an innovative company that invests in merit-worthy projects and research, in constant contact with technical institutes and universities

Often the most wonderful adventures begin when a bitter disappointment manages to bring out hidden creativity and strength, and allows new, even unexpected goals to be planned. In psychology this inner mechanism is called “resilience” and it is what makes an individual find the resources to constructively react to a ‘traumatic’ event, thus beginning to rewrite a new story for him/herself and for others. This is exactly what happened to Marco Righi, CEO of Flash Battery srl in Sant’Ilario d’Enza – province of Reggio Emilia, a few kilometres from the border with Parma – a company that in 2019, just seven years after its foundation (at the time it was called Kaitek), achieved a turnover of 14 million euros. Confirming the double-digit growth trend already achieved in recent years. 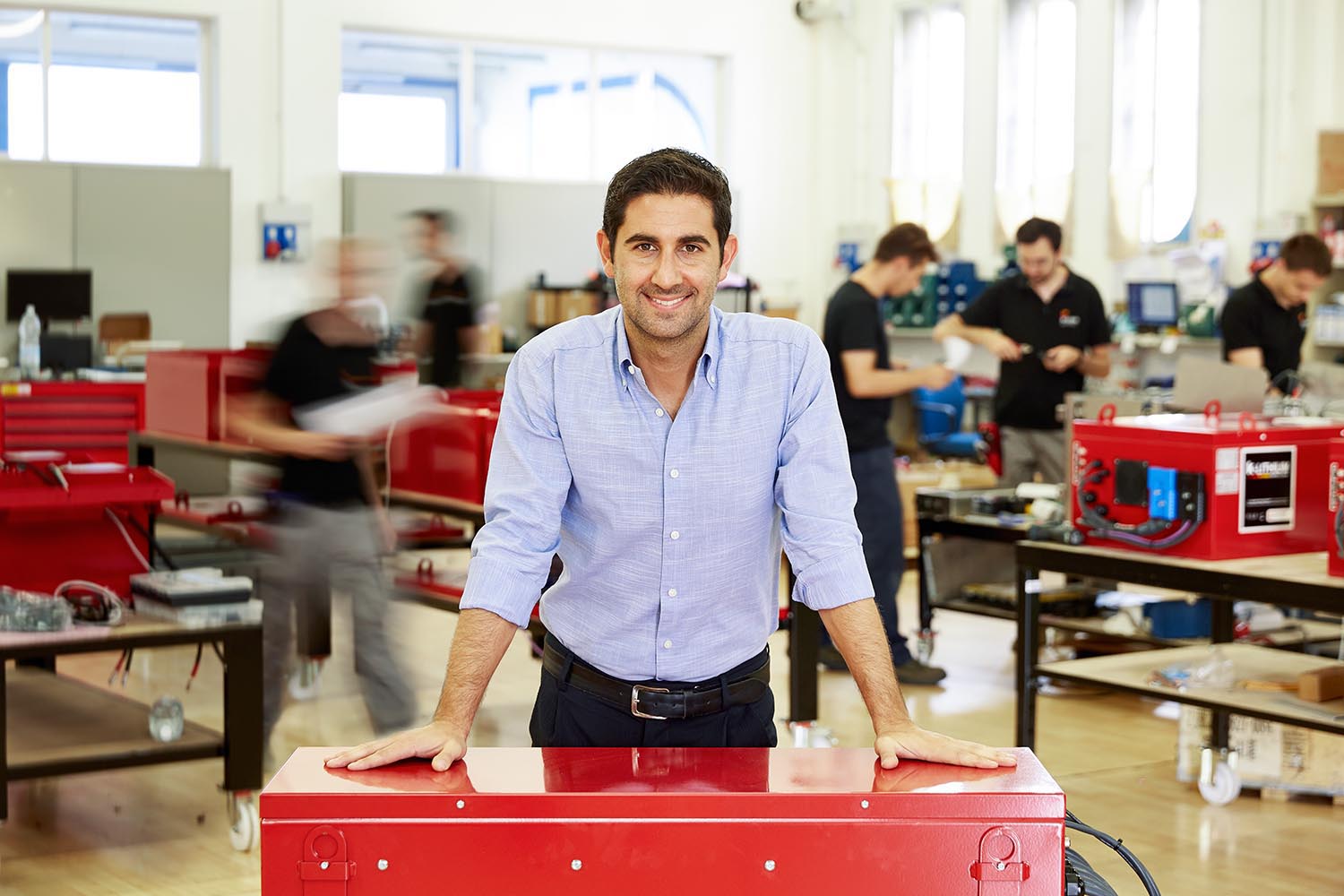 Marco Righi, born in 1985, is co-founder and CEO of “Flash Battery”

Two friends and a dream

It was 2012 when Marco Righi, together with his partner and current technical director of Flash Battery, Alan Pastorelli, started an entrepreneurial career marked with real satisfaction, year after year. Just six years earlier – it was 2006 – Marco was despondent and frustrated through a ‘forced’ stop which would also be the thrust to start again: his father, owner of a company specialised in the production of “high frequency battery chargers” (a completely new technology back then), had told him that he had to sell the business.

The news was a real cold shower for a boy who grew up day by day within those walls along with his own professional aspirations, who had also seen the expansion of his father’s company on a European level, a market segment in which in the meantime he had carved out a leadership position in the sector, with a production of approximately 60 thousand units every year.

Turning back the pages today, Marco, who thanks also to the contribution of his closest collaborators can pride himself on an entrepreneurial career already studded with significant milestones and various personal successes (since April 2019 he is the president of the Young Entrepreneurs Group of Unindustria Reggio Emilia), can only look back fondly on the countless weekends spent in a closed garage next to his friend and co-founder. They were in their early twenties and, with the enthusiasm and passion typical of their age, accompanied by a spirit of sacrifice and dedication, they tried, experimented and studied together – in an embryonic form at the time, but already intuitively ‘revolutionary’ – how to develop that new lithium battery management technology that once perfected would take them to where they are now.

The advantages of customising and remote control

“Alan and I – explains Marco Righi – understood what potential lay behind being able to relate to the manufacturers of industrial machines and electric vehicles with our patented technology, which on the one hand is highly customisable and on the other guarantees the absence of maintenance, thanks to the proprietary remote control system”. Nobody, at the time, was able to bring about effective solutions in that field. Kaitek (later Flash Battery) was able to solve several customers’ problems, and soon the word spread. “In a short time, the demand increased dramatically. And now, here we are, in this wonderful present day”.

At the end of summer 2020, the transfer of the company from its initial location (Calerno) to the new headquarters (Sant’Ilario d’Enza) was completed. The plant, 5 times larger than the previous one, covers an area of over 20 thousand square metres, of which 1,500 for offices and 3,200 for the production area, with the possibility of a further expansion of 5,000 square metres.

The best-selling lithium battery in Italy

Today, Flash Battery, in addition to the name chosen for the company (the official change of the company name, from the former Kaitek, took place on 1 August 2020), is also the registered trademark of the currently best-selling lithium battery in Italy. Righi explains: “Flash and Battery: just two words, with the idea of communicating the fundamental competitive advantage, the speed of recharging, in a concise and immediate way”. The two most recent innovations in this regard are the “Flash Data Center”, a portal created to archive all battery usage data, which can be consulted via web access, both by the assistance department and by the machine manufacturer, and the “Automatic Alert System” for automatic reporting of possible malfunctions, which allows the prevention of critical situations before they occur.

A know-how exported to 54 countries

There are already nearly sixty employees, mostly young people (the average age is just over thirty years old). Meanwhile, the number of foreign countries where the company actively exports its product and know-how has risen to 54. A tangible and ‘virtuous’ example of the application of Flash Battery technology on vehicles is that of Elettric80, a large company from Viano (Reggio Emilia) run by Enrico Grassi, which has been focusing for 10 years on ecology and sustainability, electrifying its LGV and AGV vehicles using the “FB” branded lithium batteries, also creating a fruitful ‘local partnership’ between companies in the same area.

Gratifying awards up to the Premio dei Premi

In February 2020, just before the general lockdown imposed by the government to stem the Coronavirus, Flash Battery managed to repeat a success already achieved in 2019: recognition by the Emilia-Romagna Region (as part of the “Industria Felix. L’Italia che compete” event), of “Best Company Under 40”. In September 2020 it received a special mention, for the second consecutive year as being among the Italian “Best Managed Companies”, by the jury led by Deloitte Italia. The latest satisfaction in chronological order is very recent. In November 2020, the gratifying 58th place from among 400 Italian “Champions of Growth” companies in a ranking drawn up by the German Institute for “Quality and Finance” covering the period 2016-2019; not bad, if you take into account that the initial list took into consideration about 12 thousand companies from all over Italy.

In mid-December, Flash Battery received the ‘Premio dei Premi‘ conferred by the President of the Republic of Italy, Sergio Mattarella, for its commitment in terms of innovation and in particular for the research and development of technologically advanced and competitive products, in an international market in continuous and rapid evolution. The Reggio-based company received the recognition reserved for nine of the twelve companies that have already won the ‘Enterprises for innovation’ award, organised by Confindustria in collaboration with the Giuseppina Mai foundation and the support of Bnp Paribas and Warrant Hub. The ‘Premio dei Premi’, established by the Presidency of the Council of Ministers on the initiative of the President of the Republic of Italy, was awarded for “motivations that get right to the heart of our business, closely tied to the research being worked on by so many of our young employees (62 in all, with an average age well under 40) and that has been the key to everything we’ve built during this period of growth”, says CEO Marco Righi, “proud and satisfied with the result“.

An efficient and close-knit work team

“The human resources chapter”, then explains Giulia Gibertini, Flash Battery Marketing & Communication manager, “is strategic for corporate objectives. Being proud of being part of a team like this, which we believe is superb, is a continuous motivational stimulus, which guides us in the goal of gradually adding new figures, steering ourselves to achieving results in a young and proactive context. The Research & Selection department is constantly engaged in assessing candidates motivated to grow together with the company, according to the principle of meritocracy”. Marco Righi echoes her: “Every day we strive to create a stimulating and dynamic work environment, in which the skills of employees are recognised and valued, both individually and as a work team”.

A direct line with trainees

With regard to the ‘innovation’ chapter, Righi is keen to explain: “We work in a sector where ‘growth’ goes hand in hand with ‘ability to innovate’; in this sense, it is evident that the close collaboration relationships we have with various Technical Institutes and with the University of Modena and Reggio Emilia, in particular, the Engineering Departments, take on great importance, allowing us to bring into the company mainly young people who already during their studies have the opportunity to get to know our production reality and measure themselves against our expectations, in terms of skills and passion”.

Certainly not the least of the aims pursued by Flash Battery is that of providing a direct contribution to a sustainable ecosystem. A challenge that the company tangibly took up when, at the end of 2019, it was involved in the IPCEI Project approved by the European Commission, thus becoming part – together with 17 other companies, chosen for their characteristics, throughout as many Member States – of a pool of selected sector operators. With the approval and ‘patronage’ of their respective national authorities, these companies have created a real lithium battery ‘value chain’. Objective: to ease the transition from fossil fuels to cleaner energy, in compliance with the commitments made by the European Union in the Paris Agreement.

Respect for the environment thanks to renewable sources

“Studies and constant research”, explains Righi, “reveal that increasingly more companies are adopting green choices with a view to saving energy. And Flash Battery intends doing its part in this area too. We can and must start planning and building the future together right now”. And he concludes: “The primary importance that our company recognises and attributes to environmental sustainability, the issue of clean energy and renewable sources, is central and constitutes an integral part of the values that underpin our daily business. Through our products, which are used on electric vehicles for logistics and industry, we also take care of the environment”.