In an exclusive interview for Sollevare, Marco Righi, Ceo of his Sant’Ilario d’Enza company, reveals the development programs for the most sustainable lithium technology – on the evolutionary path towards mobile machines and a new awareness for an evolving market. 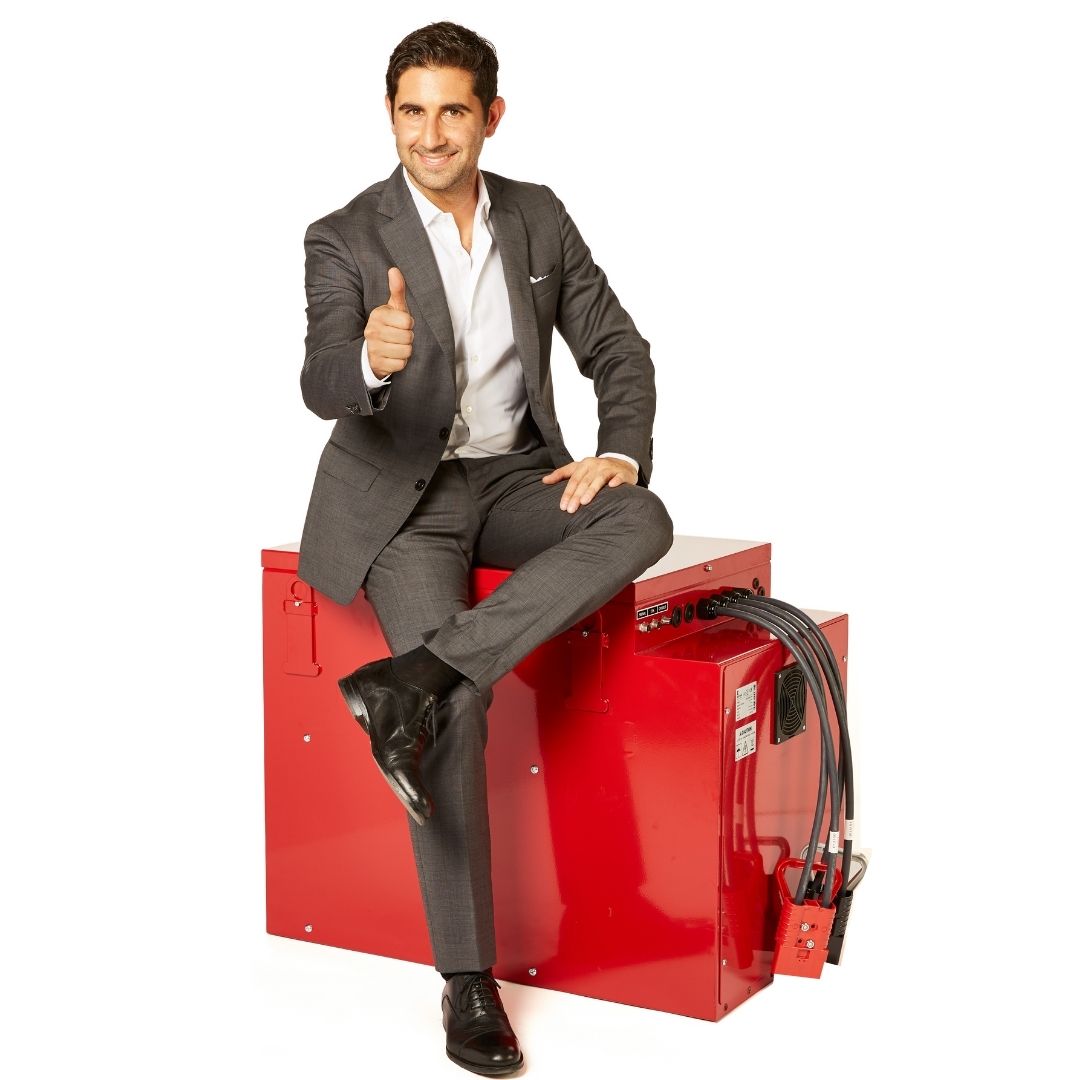 His words are measured, almost meditated in the search for the most accurate terms, definitions stripped as far as possible of any unnecessary detail. Concepts that capture the essence, with the penetration of the focused research that carries forward projects and concrete ideas. We are talking to Marco Righi, founder and CEO of Flash Battery, international players among the most innovative in the lithium battery sector applied to industrial machines and electrical vehicles. His explanatory focus reveals a lot about the current involvement of the Sant’Ilario d’Enza (RE) company in the most important developments in European research: from the IPCEI project dedicated to innovative accumulators, to the NewControl project for the development of advanced control system technologies for electrical mobility.

In our interview with Marco Righi we talk about the current period for Flash Battery, and their state-of-art technology that advances despite the storms of the Covid-19 pandemic. Naturally, we also discuss the future and the outlook for sustainability based on this unique technology and the extraordinary impact of lithium batteries.

For Flash Battery 2020 certainly did not mean suspension of industrial projects and programs. Quite the contrary, a change in company name was accompanied by the strategic transfer of the headquarters to the new base in Sant’Ilario d’Enza. Effectively the opposite of slowdown due to the Coronavirus epidemic.

Last year certainly represented a change in perspective and the acquisition of new opportunities for our company. The increased production space (3,200 m2 of production floor) after our transfer to the new HQ in Sant’Ilario d’Enza is 5 times greater than the old site, enabling optimisation of production and office work, and reducing the need for telecommuting compared to what was necessary just a few months ago in response to the health measures adopted for the Covid-19 emergency. The most immediate advantage of the new site is the optimisation of production processes for the manufacture of lithium battery packs.

New spaces and new investments for Flash Battery means more energy dedicated to research and development. How did your initial strategies take shape as regards the manufacturing processes?

The possibility of exploiting the large areas dedicated to Research and Development is another advantage of our new site compared to the old one. With this new floor space we were able to make investments in instruments and machinery that previously would not have been possible due to the limitations of our old site. Our technical experts in the Custom and R&D sections (about 35% of the entire Flash Battery team) have important resources available today for developing, designing, and testing. An example? A new climate chamber, capable of containing power packs of considerable size, for environmental testing of our battery packs from -40° up to +45°, along with new charge cyclers and other types of testing equipment.

Larger production spaces also means greater competitiveness on the market. How is the current demand for lithium batteries in Europe today?

Our capacity to compete on a European and international scale is increasing year by year. However, even global scale manufacturers of lifting machines are not currently contemplating numbers within these new product lines that challenge our supply cycle capacity. We are talking about 1% of the total number in series production, compared to thermal propulsion types, in the aerial platforms sector for example.

Without doubt the evolution over coming years for these big multinational operators will be towards technological partnerships in large scale projects with technical experts like Flash Battery, who represent suitable collaborators. Subsequently, many will assume the responsibility themselves for internal series production of battery power packs, in particular in the motor vehicles sector. Companies with high levels of know-how like ours will represent the state-of-art in the sector, with a reference public consisting mainly of medium-sized companies who are entering the lithium battery market with production turnovers of around a few thousand vehicles.

Which industrial sectors are most advanced today on the path towards electrical sustainability based on lithium?

The construction and agricultural machinery sectors are the two most active in the development of lithium technology. This means numerically higher production compared to any other sector in the mobility industry.

Our contribution to these manufacturers begins, in design terms, from the conception of a prototype, followed by successive steps moving towards a final result created precisely according to the customer’s requirements. The northern European markets are currently driving the demand for sustainable vehicles, based on unconventional, pioneering solutions with lithium batteries. However, we are still at the very beginning of widespread adoption of this technology.

Returning to research, can the contribution of Flash Battery revolutionise the future of industrial sustainability and urban mobility in EU countries? What is the necessary time frame for such a radical revolution?

In the European projects we are involved in, our focus is on control electronics for the efficient management of lithium batteries. The thrust of research in this direction will establish which batteries will be produced in 2030, representing a scientific avant-garde that looks far into the future. This involves artificial intelligence algorithms that help batteries to “understand” what their useful life will be for a given application.

We are also trying to understand whether the control intelligence should be incorporated into the vehicle itself or whether the machine should be limited to low performance logical components, instead entrusting the information to a processing cloud and then transmitting data to the battery itself, with the purpose of varying its use and extending its useful life. We need to remember that sustainability also means real efficiency of a technology applied on a global scale.

Which mobility sectors are central in your current market development?

The aerial platform sector was the first to express a need to equip itself with lithium ion battery power packs. The earliest requests to Flash Battery for applications date back to 2010 to 2012, more or less the same time that Flash Battery lithium batteries started being used in the AGV sector (editor’s note: Automated Guided Vehicles, the self-driving lift trucks used in warehouse handling and logistics).

PLEs integrate better with lithium based electrical operation because maintenance is zeroed, the weight is 1/3 compared to lead, and fast charging enables partial recharging during use without having to wait long periods for recharging. Again this sector represents a “limited” production, within the general range of each individual manufacturer. We are still far from the target percentages of 50-60% of production of electrical PLEs stated in the intentions of the more advanced manufacturers. Currently we are closer to 20%. The future development will depend on the reference markets. Anyone boasting of significant exports of aerial platforms to areas like North America has to take into account that their ecological mission for production machines is still primitive compared to other more advanced continents, even though the latter are less significant in numbers.

While awaiting the future for mobile machines, your lithium batteries also appear to be increasingly versatile.

This question touches on a fundamental issue. Recently we have completed a series of tests on third generation lithium batteries, increasing the energy density and charge cycles. We have also managed to conceive even more compact power packs, capable of supporting longer operating times. This development is of enormous value to our customers, giving their vehicles greater autonomy.

It should also be noted that over the last three years there has been a drop in the cost of raw materials for battery production and, using the same raw materials, our batteries are completely cobalt free. This eliminates one of the most difficult elements to recycle and most harmful for the environment, also during its production cycle. The development of the new generations of cells is showing increasing awareness of this aspect, in line with a clear decision we made right from the start with our adoption of completely cobalt free lithium chemicals (LFP).

In March the new European regulation will come into force regarding batteries and specifically their sustainability and disposal, on the basis of which we are already members of the National Cobat Consortium. In any case, I am convinced that regulations should always be anticipated with decisions that foresee the critical issues. Major decisions to be taken on a path that is never smooth and easy to follow. We call this path “research” and for us at Flash Battery it remains, by our nature, the only possible way.