2018 promises to be a record-breaking year for Calerno-based Flash Battery, a manufacturer of lithium batteries for industrial machines and electric vehicles that is one of the youngest and most innovative businesses in the Province of Reggio Emilia. IN this way begins the article dedicated to us on the two newspapers “Il Resto del Carlino” and “La gazzetta di Reggio”. 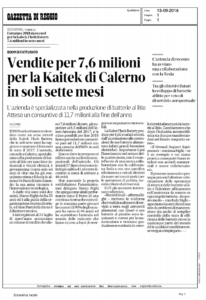 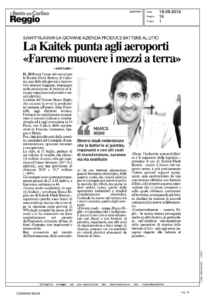 At the helm is 33-year-old Marco Righi, who first started production six years ago with his friend – and current technical director – Alan Pastorelli. The company has quickly established itself on the Italian and international markets. France, Germany, Spain and Belgium are the main destinations for its exports and it is now a renowned name in 54 different countries altogether.

Among the key growth data examined by the Board of Directors, the most notable figures regard turnover and employment.

Meanwhile, the number of employees went from 27 to 41, with a further increase to 44 due by the end of the year.

“We are very satisfied with these results,” underlined Marco Righi, the CEO of Flash Battery. “We are particularly pleased because they stem from ongoing research that largely involves young people (90% of the members of staff are under 40 years of age), thanks to which we have established a very strong reputation in areas of industry that strive to use renewable, non-polluting energy sources.”

The company is already well known in the worlds of automation, construction (large electric cement mixers run on its batteries), motoring (an ongoing partnership with the California-based corporation Tesla recently began as part of the “Tesla Destination Tour”) and electric vehicles for waste collection and deliveries in old town centres, as well as other spheres, such as totally electric industrial and street sweepers. Among its potential new markets, it is now targeting airports.

“A number of studies have shown that traditional ground support equipment that runs on diesel or polluting lead-acid batteries – with high maintenance costs and slow recharging times – will gradually be replaced by electric vehicles that run on lithium batteries,” explained Marco Righi. “Just like the automotive and logistics industries before it, in the future the world of airport transport – and more specifically all items of ground support equipment – is set to convert to electric running with lithium batteries. We’ve prepared for this very innovation and continued to invest in it. We’ve already achieved good results in terms of business agreements and new partnerships.”

“At the same time,” noted Righi, “our research will continue on other fronts. It will focus in particular on making the recharging process for lithium batteries – which is already in a different league compared to lead-acid batteries – even faster. We will also continue to hone the remote assistance that we provide for every single battery, which means that our clients are relieved of the burden not only of maintenance issues but also of simple monitoring of the efficiency levels of individual batteries, all over the world and in all conditions.”