Motor Valley. The Emilia-Romagna-based company, a key player and point of reference in the field, has moved to its new location in Sant’Ilario D’Enza. With an investment of 7.5 million euros, the company aims to quintuple its production capacity.

“We never closed for summer vacation, we took advantage of the first week of August to move into our new facility in Sant’Ilario d’Enza, and starting in the second week we could move ahead at full speed with production.” Marco Righi is the reference shareholder and CEO of the young Emilia-Romagna company Flash Battery, which in just eight years has established itself as a leading manufacturer of lithium batteries in Italy, so much so that the decision was made to invest 7.5 million euros – out of a total 2019 turnover of 14 million – to quintuple production capacity.

“It’s a bet we’re counting on winning in just a few years, reaching 20 million in turnover by 2021 and constantly sustained growth in foreign markets, which are approximately 30% of our total today but that we predict will rise to 40% over the next twelve months. Demand for electric vehicles – not only light automobiles but also crawlers for the construction sector and “green” agricultural machines – is growing exponentially, despite the crisis of the automotive sector, and European production is not currently able to keep up with the demand,” emphasises Righi, who changed his company’s name on August 1st from Kaitek Srl, its original name from its humble beginnings in a garage like so many other entrepreneurial success stories in the Motor Valley of Emilia-Romagna. 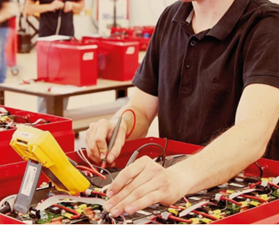 The new company name Flash Battery is also the trademark under which its “Made in Reggio Emilia” lithium batteries are known. They are the best-selling lithium batteries in Italy and the fastest to charge, and are customised to meet the needs of each individual client. “The goal is to strengthen the identity of our brand, emphasising its business segment and one of the key characteristics, recharging speed, that is essential to competitiveness in both the electric vehicle industry and in the significant part of the manufacturing industry that is progressively converting to electric production.” The CEO adds that after three months of slowdown due to the Covid emergency, July came to a close with an all-time record in monthly turnover and in September the company will have already recovered all the ground lost earlier in the year. Projections show the end-of-year total in line with the previous one.

“The pandemic slowed down our activity a bit, but didn’t slow the expansion and strengthening work we had put in motion, not only on the production front, with our new environmentally-sustainable and plastic-free facility built in record time (less than a year) but also in the R&D, design, marketing and internationalisation sectors. In those areas, we are hiring five more professionals who will bring our staff numbers up to 60 by December. But the new headquarters is designed to hold 150 people,” emphasises Righi, who is just over thirty years old, the average age of Flash Battery workers. Of those 60 employees, 20 are dedicated to research and development: the freshness of their talent and their capacity for innovation were good enough to earn the company two consecutive years (2019 and 2020) of the prize for best business under 40 in the Emilia-Romagna region.

Just before the move to the new headquarters, Righi also sealed an important agreement with Efa France, one of Europe’s leading players in electrification technology. “We are working a lot with the systems integrators on the other side of the Alps, not only in France, but also Germany and the Benelux countries; Northern Europe is investing in electrification more than we are. This partnership with Efa is dedicated to innovation and has excellent possibilities for expansion,” Righi concludes. Righi has the entrepreneurial spirit running through his veins (his father produced traditional battery chargers, but sold his company), a specialised diploma and a degree in economics in his pocket, and an industrial partner like Elettric80 to serve as a pillar. This Reggio Emilia-based company, which makes technologies for logistics automation (robots and self-guided vehicles for handling goods, with 270 million in revenue for 85% export and 970 employees between Viano and worldwide offices stretching from Thailand to Brazil) is in fact both a minority shareholder of Flash Battery, holding 40% of the shares, and a key customer, using two out of five of the batteries produced in Sant’Ilario d’Enza.

14 MILLION: 2019 TURNOVER. The turnover of the young Reggio Emilia-based company, a leading Italian manufacturer of lithium batteries, which has the goal of increasing turnover to 20 million in 2021 by quintupling production.

30 %: EXPORTS. The current percentage of foreign markets in Flash Battery’s activity. With such steady and sustained growth that the company estimates the number will reach 40% in the next twelve months. Demand for electric vehicles is in fact growing exponentially.

60 EMPLOYEES: THE STAFF. The company is hiring new professionals and will reach a staff complement of 60 employees by December, 20 of whom are dedicated to research and development. The new headquarters in Sant’Ilario D’Enza is designed to hold 150 people.